By KARL ACKERMANN
September 5, 2018
Sign in to view read count 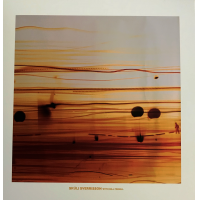 On their two previous third-season releases, Andy Zimmerman's Half Light and Lionel Loueke's Close Your Eyes (both 2018), Newvelle Records pushed the envelope just a bit away from the deeply melodic formula that they have favored across seventeen albums to date. While those vinyl releases incorporated more elements of improvisational complexity, they were hardly foraying into the avant-garde. On Strata the duo of bassist Skuli Sverrisson and guitarist Bill Frisell bring us back to the purely melodic model.

Despite more than one-hundred appearances on record, Sverrisson is not well known in the US. The Icelandic electric and acoustic bass guitarist (who also plays double bass, dobro, and charango) has worked with Allan Holdsworth, Jim Black, Chris Speed, David Sylvian, Ben Monder, Theo Bleckmann, Mark Dresser, Wadada Leo Smith and many other international artists.

If any single musician/composer represents the broad swath of American music, it is Frisell. His music defies labels even while incorporating jazz, avant-garde, free jazz, folk, western and country. Frisell's work with Arild Andersen, Joey Baron, Hank Roberts, John Zorn and Joe Lovano have earned him critical acclaim and multiple awards, including the 2005 Grammy Award for Best Contemporary Jazz Album for his Unspeakable (Elektra Nonesuch, 2004).

Sverrisson wrote all the music on Strata—many of the compositions tailored to Frisell, with whom the bassist had not previously worked. The ten pieces are relatively brief, only two at more than five minutes. Opening Side A are two folky numbers, "Sweet Earth" and "Instants," Frisell's electric guitar resonating warmth. "Vanishing Point" brings Sverrisson more into focus and "Ancient Affection" puts Frisell's trademark reverberation on display. The echo continues to ring through the first side closer, the ballad, "Came to Light." Side B begins with the dream-like "Cave of Swimmers" followed by another elegiac song, "Amedeo." "Afternoon Variant" finds Sverrisson and Frisell playing as a more straight-forward guitar duo, but adding some odd meters for interest. The album closes with the beautiful and sophisticated "Her Room."

Strata is a highly appealing album, and Sverrisson could have been channeling Frisell as these compositions sound so germane to the guitarist. He takes a generous approach in letting Frisell do most of the heavy lifting, including tracking a second guitar, but there are ample opportunities for the pair to complement each other. There is a symmetry that would befit a long working relationship when the two are playing in tandem. The quality of the music, the musicians and Newvelle's technology, make this an enormously rewarding album.

Side A: Sweet Earth; Instants; Vanishing Point; Ancient Affection; Came to Light; Side B: Cave of the Swimmers; Amedeo; Afternoon Variant; Segment; Her Room.