By KARL ACKERMANN
November 16, 2017
Sign in to view read count 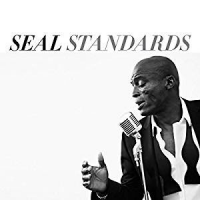 It shouldn't be a surprise that Seal would take on the American songbook, with a baritone that was made for classics like "Autumn Leaves" and "Love for Sale." Born Henry Olusegun Adeola Samuel in Paddington, England, the singer, guitarist and composer rose to fame with his global hits, and Grammy-winning songs, "Crazy" and "Kiss From a Rose," both from his first self-titled album (Warner Music UK, 1991). That album—and a number of subsequent Seal releases—were produced by Trevor Horn of The Buggles and Yes. Seal had previously released two albums dedicated to soul classics but Standards is Seal's first foray into the jazz world.

Seal recruited a number of musicians who would bring additional jazz-legitimacy to this project. Pianist Randy Waldman toured with Frank Sinatra and worked with George Benson and The Manhattan Transfer; Greg Fields also played drums with Sinatra and with The Count Basie Orchestra. Bassist Chuck Berghofer played with Ella Fitzgerald, Stan Getz, Gerry Mulligan, Art Pepper and others.

Seal's arrangements are not especially innovative but that's an advantage in that the interpretations shine solely on his extraordinary vocal ability. Especially rewarding is "I Put a Spell on You," first made popular by its writer Screamin' Jay Hawkins and later by Nina Simone. Seal offers a beautiful version of "Smile," a hit for Nat King Cole in the mid-1950s, the song was written by Charlie Chaplin in 1936, for the soundtrack to his movie Modern Times. Seal gives new life to Duke Ellington's "I'm Beginning to See the Light" and Cole Porter's "I've Got You Under My Skin" and includes an outlier, "Anyone Who Knows What Love Is," co-written by Randy Newman and Jeannie Seely.

To add to the aura of authenticity, Seal recorded a good portion of the album in the studios where the original classics were captured, including Capitol Records in Los Angeles and Sinatra's United Studios. During his career, Seal has sold more than thirty-million albums and those who appreciate his popular music legacy are not likely to crave a shift to crooner status. Be that as it may, Annie Lennox and Lady Gaga have successfully taken on standards and Seal is, arguably, a more comfortable fit in this genre. Standards never feels like a pop star cross-over and it would be a welcome treat if Seal chose a follow-up with less ancient material.

Luck Be A Lady; Autumn Leaves; I Put A Spell on You; They Can’t Take That Away From Me; Anyone Who Knows What Love Is; Love For Sale; My Funny Valentine; I’ve Got You Under My Skin; Smile; I’m Beginning To See The Light; It Was A Very Good Year.