BY JACK BOWERS
September 22, 2014
Sign in to view read count 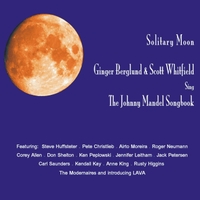 The unabridged subtitle of this endlessly charming album is "Ginger Berglund & Scott Whitfield Sing the Johnny Mandel Songbook." For those who were unaware that there is a Johnny Mandel Songbook apart from "Emily," "The Shadow of Your Smile" and "Close Enough for Love," this scintillating summary is a guaranteed eye-(and ear-) opener, lovingly packaged and earnestly delivered by Berglund and her multi-talented husband, trombonist / arranger / singer Whitfield.

That "memorable trio" of songs are here, as indeed they should be; but Mandel, who began his career as a trumpeter, has been writing beautiful music for more than half a century, an appraisal that is borne out from the opening measures of the too-seldom-heard bossa "Cinnamon and Clove" (lyric by Alan and Marilyn Bergman, who also inscribed "Solitary Moon," "A Waltz from Somewhere," "Sure as You're Born," "I Won't Believe My Eyes" and "Where Do You Start?"). With all due respect to other architects of the Great American Songbook, Mandel should clearly be reckoned among the best of them. His melodies are invariably bright and engaging, the lyrics cogent and persuasive (besides the Bergmans, Mandel's able collaborators on these fifteen tunes include Dave Frishberg, Arthur Hamilton, Paul Francis Webster, Paul Williams and the peerless Johnny Mercer).

As if things weren't tasty enough already, Whitfield and Berglund sweeten the deal by shuffling the deck, employing everything from a big band to small ensemble, solo guitar to a cappella vocal (by the Modernaires, in which group Berglund and Whitfield are card-carrying members) on "Where Do You Start?," not to mention a host of immoderately talented teammates. Ken Peplowski and Don Shelton are the clarinet soloists on "First" and "I Never Told You," Peplowski (with Whitfield and bassist Jennifer Leitham) on the spicy "El Cajon." The session is further enriched by the awesome talents of tenors Pete Christlieb and Roger Neumann, alto Rusty Higgins, guitarist Jack Petersen, drummer Kendall Kay, pianist Corey Allen, percussionist Airto Moreira and trumpeters Steve Huffsteter, Jonathan Dane, Anne King and Carl Saunders (with whom Whitfield solos and scats on the kinetic "Sure As You're Born").

As noted, Mandel started as a jazz trumpeter who wrote for big bands (most notably, the Woody Herman classic "Not Really the Blues"), and one of the songs here, "Little Did I Dream" (clever lyric courtesy of Frishberg), began life as "Hershey Bar," an instrumental written for the great tenor saxophonist Stan Getz. "Dream" is also the number on which Berglund / Whitfield come closest to emulating the buoyant interplay of role models Jackie Cain and Roy Kral. Other highlights (to be fair, every number could be singled out for similar praise) include Berglund's lovely duet with Petersen on the tender ballad "You Are There"; a second bossa, "I Won't Believe My Eyes," conspicuously brightened by the Bergmans; Arthur Hamilton's perceptive lyrics on "First," "Vacation from the Blues" and "I Never Told You"; the seldom-sung introduction to "The Shadow of Your Smile," and group vocals by LAVA (the Los Angeles Vocal Alliance) on "El Cajon" and an upbeat "Emily." LAVA is comprised of Whitfield, Dane, Larry Williams and Rich Bullock.

Mandel, now eighty-eight years old, had to wait a long time for a recital of his music as genuinely inspired as this, but at last it has arrived. He should be enormously pleased, as would anyone who listens to The Johnny Mandel Songbook. A clear and well-earned five stars.