By KARL ACKERMANN
October 11, 2019
Sign in to view read count 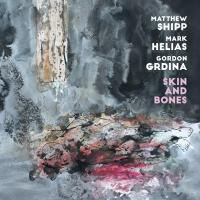 The Skin and Bones Music Series is an ongoing succession of creative music events in various venues in and around the city of Kelowna in British Columbia. The concerts have hosted a diverse group of jazz artists from veterans such as Peter Brötzmann to rising stars The Bjorn Kriel Trio. Among the series' featured acts was the power trio MGB, with guitarist, oud player, and oboist Gordon Grdina, Matt Mitchell and Jim Black. In 2018, Grdina returned with virtuoso pianist, composer and improviser Matthew Shipp and master bassist Mark Helias for a performance at Kelowna's hundred-year-old First United Church. Their album Skin and Bones takes its title from that series but was recorded at Afterlife Studios, also in British Columbia.

Grdina, a Vancouver native, made his debut as leader in 2006 on Think Like the Waves, an impressive trio debut that featured Gary Peacock and Paul Motian. In 2018 he won the prestigious Juno Award for his solo album China Cloud (Madic Records). Shipp was the subject of retirement rumors in 2017 but has gone on to lead or co-lead twenty albums since, all worthy of inclusion in an imposing portfolio that will soon hit ninety releases. Helias has worked with the legends Anthony Braxton, Ed Blackwell, Oliver Lake, Julius Hemphill, Don Cherry, Cecil Taylor and many more.

The seven tracks on Skin and Bones are real-time improvisations. The drummerless trio imparts a dynamic that—for the first forty minutes of this seventy-plus minute album—gives equal footing to the members. There are interactions, push-and-pull, but the communications are less argumentative; Grdina and Shipp engage in intelligent discourse with few sizzling inflection points. On "Bob and Weave" and "The Distance," we hear the coexistence of lyricism and detachment as guitar and piano explore inside and outside the bewildering array of sounds. That weirdly idyllic environment changes dramatically with "The Onslaught"; Shipp's thunderous chords, Helias' bowed bass and Grdina utilizing the oboe and guitar, create an alien carnival air.

"Feather Weight" opens with a highly entertaining duet between Helias and Shipp, Grdina entering to add a more complex layer to the piece. Taken with the closing piece, "The Slip," the program takes on a suite-like quality despite the spontaneity of the music. Skin and Bones mostly avoids pyrotechnics, instead igniting smaller fires whose embers almost accidentally touch on the players, inspiring them with the faintest light. With every shift of the wind, we are taken to a new and intriguing place.

Bob and Weave; The Distance; Solitary Figure; Stick and Move; The Onslaught; Feather Weight; The Slip.