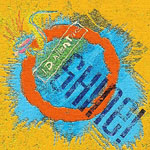 It's impossible to be an impostor at the gambit in which J.D. Allen's trio is participating. His jukebox length compositions either hit or have the possibility to miss badly.

Luckily, he has released a second trio album of all bull's-eyes.

Shine! follows the pattern established on I AM I AM (Sunnyside, 2008). Allen writes, and his trio performs short-ish, three, four, and five minute compositions that are the musical equivalent of the two-minute drill in football, maybe even sudden death.

But maybe this has gone too far.

His concept is to hit hard and fast with a ferocity that can be located somewhere near the intersection of John Coltrane and Sonny Rollins, but equally cognizant of Dewey Redman and Pharoah Sanders. Bassist Gregg August and drummer Rudy Royston are back for this recording, having more than proved their mettle with the last outing. Royston, a powerful drummer cast in the mold of Elvin Jones, is confident in going toe-to-toe with Allen. He opens the disc with a rolling thunder solo before Allen's upper register tenor digs into what could have been a Coltrane solo heard after, maybe, 50 minutes of the great one working a composition. Allen and company cut the filet off the T-bone in a mere two-and-a-half minutes.

This brevity in solos squeezes the cream to the top. Still, the compact presentation never feels incomplete or abbreviated. Even the title track, a gentle ballad played wistfully, completes its pensiveness without lingering too long. Allen's "East Boogie (Kolby's Theme)" is a variation on Ornette Coleman's "Ramblin," and the bluesy "Angel" delivers a pithy groove around August's smart walking bass. The invocation of "Se'lah" could have been part of Coltrane's A Love Supreme (Impulse!, 1964) for the 21st century, flowing nicely into the ending track, a resolution of stated love.

An early contender for album of the year—again.