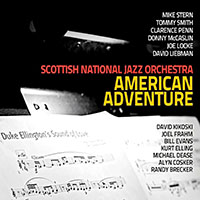 Sometimes an idea seems great on paper, but in execution doesn't exactly work out as planned. Other times, that same idea doesn't just look great, it actually exceeds already high expectations. When saxophonist Tommy Smith—almost single-handedly responsible for rebuilding a modern jazz scene in his home country of Scotland, where he returned after studying at Boston's Berklee College of Music in the 1980s and releasing a couple of well-regarded albums on Blue Note—brought his Scottish National Jazz Orchestra to the United States in the summer of 2013 for a short tour, he came up with the idea of hitting Avatar Studios in New York City to record a number of well-known jazz tunes, largely arranged by a collection of American composers/arrangers and featuring a cherry-picked collection of A-list American players.

The result, American Adventure, might be considered a pleasant surprise, if it weren't for the consistent excellence Smith and the SNJO have already demonstrated on albums like Torah (Spartacus, 2010), an ambitious suite of music originally written by the Scottish saxophonist to feature Joe Lovano (who delivered the piece with SJNO in 1999) but, on the recording, featured Smith in one of the best performances of his career to date.

And speaking of incendiary, Jim McNeely's arrangement of pianist Richie Beirach's "Pendulum"—the title track to the live recording Pendulum (Artist House, 1978), reissued in expanded form by Mosaic in 2008 as Mosaic Select 32: Pendulum Live at the Village Vanguard—becomes a ten-minute tour de force that, beyond McNeely's expansion of the tune's basic premise into something more appropriately epic, features positively nuclear solos from tenor saxophonist Donny McCaslin, pianist Dave Kikoski (the only artist to feature on more than one track) and saxophonist Dave Liebman, Beirach's longtime musical cohort who played on the original, continues to play it with the pianist in the reformed Quest, and here rips it up with a searing soprano solo that may well provide the album's most thrilling moment.

And that's saying something. Vibraphonist Joe Locke turns in a powerhouse performance on Sturm's energetic rework of Wayne Shorter's "Yes or No," originally from the saxophone legend's JuJu (Blue Note, 1964), but here swinging so hard it just about bursts off the page, with Cosker taking very little solo space but listed as "featured," no doubt, for his potent performance throughout. Saxophonist Bill Evans manages to evoke memories of Michael Brecker without being at all imitative on Smith's reverent but expansive arrangement of Chick Corea's "Quartet No. 1 (part 2)," from the pianist's classic Three Quartets (Stretch, 1981), while another Shorter composition, "Pinocchio," first heard on Miles Davis' Nefertiti (Columbia, 1967) and here, arranged by Jacob Mann to swing in a more traditional space, closes the set on a high note with impressive turns by trombonist Michael Dease, saxophonist Joel Frahm and drummer Clarence Penn.

Geoffrey Keezer's arrangement of John Coltrane's balladic "Dear Lord" (featuring the consistently excellent Kikoski, as well as a lyrically searching solo from trumpeter Randy Brecker) and Smith's lush arrangement of Charles Mingus' "Duke Ellington's Sound of Love" (sung by Kurt Elling and with the arranger featured on an elegant solo) add much-needed respite from the rest of American Adventure's thrill-a-minute energy, a Scottish-born but undeniably credible and deep tribute to the tradition that succeeds on many levels.

Intelligent, contemporary big band arrangements for Smith's clearly talented and broadly capable Scottish National Jazz Orchestra combine, on American Adventure, with its collection of a baker's dozen of top-drawer American musicians—well, twelve Americans plus one Scot—for an hour-long set that, in the very capable hands of Smith and his stellar 14-piece big band, prove the tradition is alive, well...and taking place on a global scale.