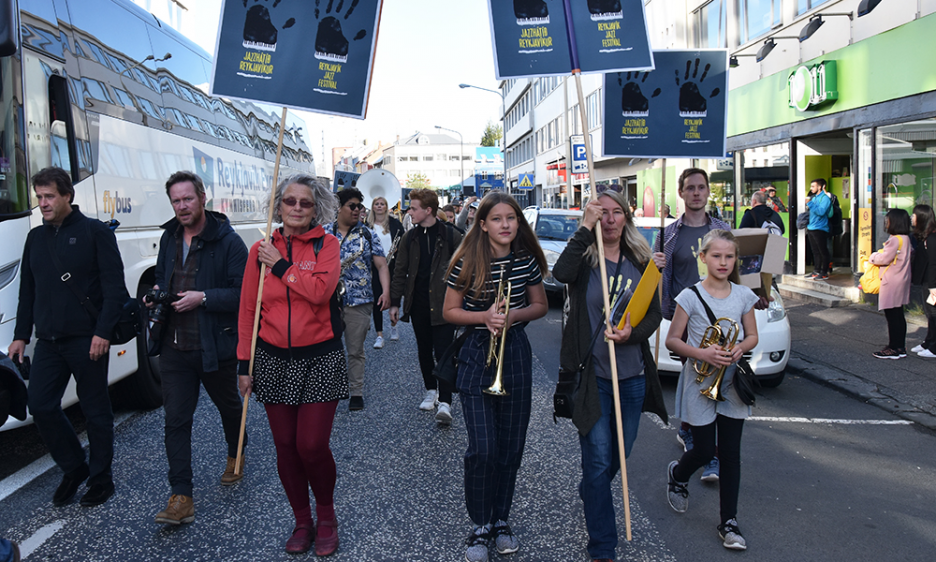 Iceland has produced, and continues to produce, many outstanding artists—some of them world-famous, such as Björk, Múm, Sigur Rós, Ólafur Arnalds, Mingus Amungus, Emiliana Torrini, Of Monsters and Men—which is quite remarkable if one thinks that the country has less than 350,000 inhabitants. 130,000 of these live in the capital, Reykjavik, the most Northerly European capital, vibrant and intriguing (even though perhaps not as much as the striking natural environment —geysers, volcanos, waterfalls, spectacular landscapes —that can be found all over Iceland).

The "land of ice" (Iceland in Old Norse) is also the place of origin of some phenomenal music festivals, such as Iceland Airwaves (in November), Secret Solstice (in June), Sónar Reykjavík (in February) as well as the Reykjavik Jazz Festival (August-September), which was the reason why I was in town.

The Reykjavik Jazz Festival is the most important (or rather the only) jazz festival in the country. Established in 1990 and now in its 29th edition, it is the longest running festival in Iceland and presents the best musicians of the local scene alongside important international stars. Since 2014 it has been directed by the pianist Sunna Gunnlaugs and the double bassist Leifur Gunarsson, who succeded the percussionist Pétur Grétarsson, director of the previous eight editions.

Traditionally, the festival has been an important showcase for local musicians, and this year many of them were in peak form, promoting new albums or premiering new projects. According to a well-established tradition, the starting whistle consisted of a parade of musicians that took off from the Lucky Records store and took over the city streets until they reached the municipal library —where the inaugural ceremony was held.

From among the international stars, the brightest radiance came from the supergroup led by Marilyn Mazur. Shamania offered an astonishing instrumental palette which gathered some of the leading artists of the Scandinavian scene, united in a project of powerful empathy, energy and playfulness. Ten top-class instrumentalists who together multiply each other's potential by ten: the voices of Josefine Cronholm and Sissel Vera Pettersen integrated each other in a sublime way, without a hint of competition; Hildegunn Oiseth with her goat horn and trumpet evoked distant roots echoing the elves of her homeland; Lotte Anker on saxophones and Lis Wessberg on trombone soard high while Anna Lund and Anna Lundqvist Quintet provided the pulsating drums that, together with Mazur's percussions and Ida Gormsen's thrusting bass, drove the ensemble into an authentic shamanic trance. Makiko Hirabayashi and Mazur, situated at the two ends of the stage, established a telepathic interaction with the dance steps of Tine Erica Aspaas. The ensemble delivered a very powerful performance—heartfelt and spontaneous—that swept the audience away. The only questionable aspect was the use of keyboards in an otherwise acoustic soundscape, which unnecessarily weighed things down.

Drummer Scott McLemore (an American who has lived in Reykjavik for thirteen years) was at the helm of a remarkable quartet with two guitarists in the front-line: the Icelandic Hilmar Jensson and the French Pierre Perchaud. He presented The Multiverse, a new album strongly inspired by John Abercrombie's work but which at the same time—thanks to the sound and phrasing of Hilmar Jensson—often brought out echoes of Bill Frisell, to whom the band's leader, not surprisingly, dedicated the final tune. The concert showcased a fine quartet, solid and cohesive, with two guitars that blended together beautifully thanks to their different voices and an admirable sense of measure.

The Trio of Marcin Wasilewski came to prominence though its collaboration with Tomasz Stanko and has been performing around the world for over twenty years. They recently released Live (ECM) and opened their set with a couple of original compositions taken from Spark of Life (ECM, 2014). Right from the first song, the trio's teamwork and ability to build captivating thematic and melodic developments was very clear. These qualities were confirmed in the following song, "Hyperballad" by Björk, dedicated to the Icelandic singer. The set was strong and sincere and featured mostly original compositions, with the exception of an acoustic version of "Actual Proof" by Herbie Hancock, where the trio nodded to the American tradition and showed off its technique and muscles... maybe for too long, at the expense of effectiveness and originality.

Sunna Gunnlaugs, a significant pianist and composer in her country, is at home at the festival. For the occasion, she presented Ancestry the new album with her long-running Trio (Þorgrímur Jónsson on bass and Scott McLemore on drums) and the Finnish trumpeter Verneri Pohjola as special guest. This project, born in Finland on the occasion of the 2017 edition of the Tampere Jazz Happening, propelled the trio into a fresh international dimension. Their performance offered a well-calibrated Nordic mood that reached a peak of melancholy with the song "Emu," composed by Pohjola and dedicated to the founder of Digelius, the main record store in Helsinki, who had recently passed away.

Sam Healey a young saxophonist from Manchester, who until a few months ago was a permanent member of the Beats & Pieces Big Band, joined up with the talented drummer Craig Hanson to form the duo "Skeltr" (named after the Beatles' song "Helter Skelter"). A sparkling duo, explosive and very English, without pretensions of ground-breaking originality.

The saxophonist Óskar Guðjónsson did not present projects of his own at the festival but he added a little light-hearted imagination to the far too predictable set of Danish bassist Richard Andersson.

The DOH Trio (Daníel Helgason guitar, Óskar Kjartansson drums and Helgi R. Heiðarsson sax) presented their debut album. Thanks to soundscapes which blended rock, jazz and punk, they brought back much needed energy after the sedated atmosphere of the previous set.

The festival managed to draw large crowds, despite the competition of two major music events, the Extreme Chill electronic music festival and the series organized by the Mengi collective (founded by bassist Skuli Sverisson and other Icelandic improvisers).

In closing, an observation about the location of the festival. The organisation was unable to secure access to the venue that it has used since 2011, Harpa, the magnificent concert hall designed by Olafur Eliasson and inaugurated in 2011. As it's increasingly common all around the world, local and national administrations build amazing concert halls like this one, without making them accessible at sustainable costs to local festivals, thus de facto reserving them to events with glossy commercial and popular appeal. The result? The organisers of precious long-running festivals like the Reykjavik Jazz Festival are forced to resort to alternative locations scattered around the city. A real shame.

So, this year, the festival's main venue was the Tjarnarbíó, an aging building constructed in 1913 and originally used as an icehouse, then as a fire station and finally, today, as an independent theatre. It was complemented by the use of other spaces, such as the Hannesarholt gallery, the Iðnó theater, the Kartöflugeymslurnar (an old potato store outside the city) as well as the local Grand Hotel. Let's hope that for the next edition of the Festival, the administration will realise how valuable and important this festival is for the entire country, and support it, by making the Harpa Concert Hall available again: next year will be the thirtieth edition, what better occasion for boosting the Reykjavik Jazz Festival?