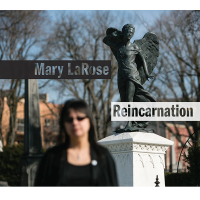 The best stories are, indeed, the one's you already know. Told over- and-over again, each time a little different. That's comfort food for the ears. Enter vocalist Mary LaRose, recounting the music of Charles Mingus, Eric Dolphy, and Ornette Coleman with lyrics she penned and performed as a sympathetic partner to these jazz giants.

The singer has visited some of this music before, recording Coleman's "Broken Shadows" and some Mingus on her disc Cutting The Chord (Leadhead Productions, 1995). The difference from that fine record (it is out-of-print, but worth seeking out) is that this version is presented primarily with accompaniment of the Brooklyn Rider string quartet rather than a jazz quintet.

Opening with "Reincarnation Of A Lovebird," she redecorates Mingus with a deja vu, not unlike Hal Wilner did on his Weird Nightmare: Meditations on Mingus (Columbia, 1992) via string quartet and a guest clarinet solo by Jeff Lederer. The music is Mingus, but updated to Guiliani and Bloomberg's version with "Nostalgia In Time Square" lamenting to substitution of Disney and Starbucks for peep shows and malt liquor.

Thelonious Monk and Mingus are intertwined with Dolphy, as the singer covers Mingus' "So Long Eric," Dolphy's "Straight up And Down," and Dolphy's tribute to Monk, ""Hat And Beard." the latter a hopping Raymond Scott-sounding romp over the high priest of bebop's notes with a guest solo from the innovative purring trumpet of Kirk Knuffke.

Knuffke can also be heard on a clever cover of Johnny Cash's "Ring Of Fire." The tune, drawn out and cooked more slowly as to suggest you consider the lyric in a whole new light. Same for "Witches And Devils" sung with wordless lyrics before Lederer's singing clarinet and drummer Matt Wilson's brushes dust off the eeriness of jazz's Holy Ghost, Albert Ayler's hallowed composition.

LaRose doesn't just accompany the band, her voice is another instrument of the music.

Reincarnation Of A Lovebird; Broken Shadows; Nostalgia In Time Square; Eclipse; Straight Up And Down; Ring Of Fire; So Long Eric; What Reason Can I Give?; Hat And Beard; Witches And Devils.