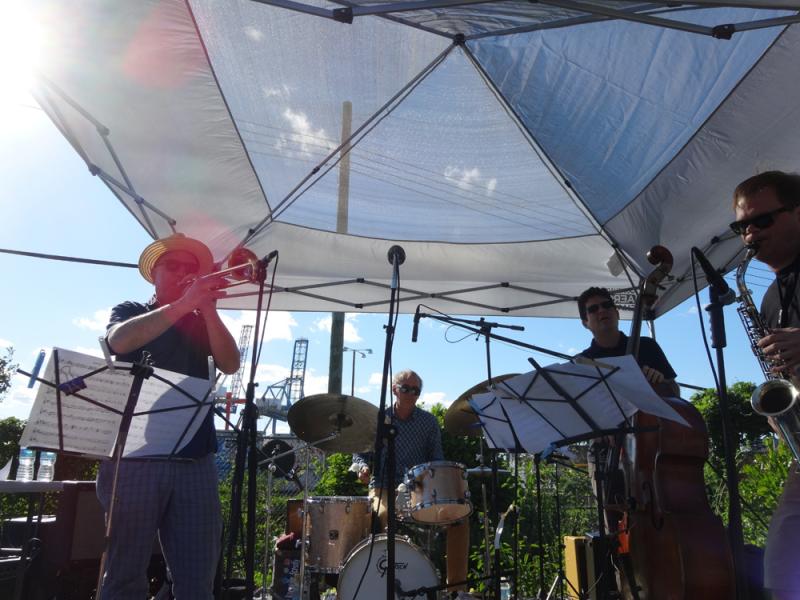 This ninth edition of the Red Hook Jazz Festival appeared to draw its biggest crowd yet. Not that it's a large- capacity event, but perhaps a setting close to the water's edge at Red Hook makes it seem psychologically inaccessible to the lazy New Yorker, involving an actual 15 minute amble from the closest subway station. Plus, the always enticing line-up involves acts that doubtless appeal to the more specialised jazzer. The Urban Meadow Community Garden is a small grassy oasis, surrounded by houses, with vast shipyard loading gantries looming in the distance. The festival enjoys a downhome vibration, peopled by local vendors. The pickled gherkins-on-sticks were particularly sought after.

Mike Golub is still at the helm, with general organisation, but guitarist James Keepnews now plays a significant role, sharing out the work-load. The festival is divided into a pair of Sunday afternoons, on adjacent weekends, each involving five bands. Last year, the second half was rained off, being rescheduled for the end of the summer, but this year, both scorching days went ahead as planned. Sunny though the first half might have been, it had to contend with some quite severe winds ripping up unexpectedly, providing challenges for those players who were referring to their (flapping) pages of music. Everyone persevered in adversity, and some spectacular sounds resulted.

Joe Fiedler's Big Sackbut opened the proceedings on the first day, leading a band designed to satisfy trombone-lovers, and also featuring a bonus tuba. The band-name makes reference to the 'bone's early music ancestor, the sackbut, which hails from the 15th Century. Fiedler's music sounds much more modernised, even though the first tune was the "Sackbut Stomp." It made for a jostling intersection of jollity between the combo's three trombones and single tuba, as the players valiantly battled against the blustery dangers, the gaps between each number extended whilst they secured their scores. That day's headliner was to be Sexmob, and their slide trumpeter Steven Bernstein was already arrived, and ready to guest on "King Of The Road." This was originally penned by country singer Roger Miller, but subsequently tackled by countless artists, notably George Jones and Dean Martin. It was an unexpected choice of material that sounded bright and optimistic in this verdant encampment, Bernstein inserting his mute for added sensitivity, Fiedler adding a buzzing-tread backing. The Big Sackbut preened carefully, spacing out phrases, with Jose Davila harrumphing deeply underneath Ryan Keberle, Luis Bonilla and Fiedler himself.

Tomas Fujiwara & The Hook-Up played next, a band that essentially features Thumbscrew as its core, the drumming leader joined by bassist Michael Formanek and guitarist Mary Halvorson. Horns were provided by Jonathan Finlayson (trumpet) and Brian Settles (tenor saxophone/flute). The wind buffeted even harder, artists hanging onto their music stands, microphones and cymbal stands. Instead of spoiling the set, this situation added a positive sense of tension to the music, and certainly greater suspense in compositions which were already coiled with dramatic tightness. Most of the pieces were dense with activity, but there were also breakdown sections for the bass, which eventually wove in with trumpet and guitar tendrils, tenor added later. A stately section acted as a partner to the shoreline whoosh, Finlayson giving a trumpet fanfare as Fujiwara scattered drum patterns in urgent response.

The Pakistani American guitarist Rez Abbasi can sometimes sound quite smooth and mellow, but his Junction outfit offered a surprisingly gutsy texture and a volatile construction. He was joined by Mark Shim (tenor saxophone), Sam Harris (keyboards) and Kenny Grohowski (drums). Synthesiser basslines and a dreaded ewi (electronic wind instrument) landed the music back in the 1970s, but the noodling was frazzled rather than overcooked, blessed by a careening complexity, drums skipping and juddering. Abbasi solos in the Larry Coryell or John McLaughlin modes, reflecting these guitarists at the most scabrous ends of their vocabularies. He sent out spiralling lines, halting then spouting, the only problem being that Shim and the leader occasionally cancelled each other out, operating within similar sonic parameters.

It wasn't such a trial to predict the heralded special guest with singer Judi Silvano's Zephyr Quintet, given that her husband is saxophonist Joe Lovano, choosing to bring out his soprano. Silvano's slick vocal impressionism was very straight-ahead, as she scatted around the hovering guitars of Kenny Wessel and Bruce Arnold. Lovano snake-charmed above a guitar that sounded rather like a crunchy Fender Rhodes electric piano, but Silvano's verbal acrobatics began to sound slightly irritating at length.

The lords of the garden were, not surprisingly, the mighty Sexmob, with the constantly wisecracking Steven Bernstein capitalising on the afternoon's bonhomie. By this time, running slightly late, it was getting into the early evening, and the wind had subsided, the pickles having run out completely. A kitschy Egyptian-style opener slinked in, with altoman Briggan Krauss squalling and scrabbling, Bernstein cutting sharp, alternating with a Tony Scherr bass vamp. They all reached an agreement, jumping into a headbanging section, Krauss soloing further, with a free raggedness. The mood turned Balkan, microphone deep into bell, bass tones magnified, switching to a Moondog-ed sparseness, becoming very tranquil. Bernstein announced that they've just made a cd "that you can't Google," before dragging the orientation down to New Orleans, holding a six-year-old kids dance contest down at the front of the stage, the prize being a pickle. Perhaps they'd reserved a secret stock-pile. "No pickles for children," Bernstein bemoaned. "Go home and play computer games instead!." A Prince memorial celebration was held in the form of "Sign O The Times," getting into a deep house feel as Joe Fiedler brought the day full circle, guesting with the Mob. An understated, fluttery exchange between the horns took it down, as Bernstein called out "Kenny, your big solo!," sticksman Wollesen sensitively smashing the tiny gong cymbals laid out on his skins. Sexmob aren't massively active nowadays, but there's still life in these old members yet...

And so ended the first day, with breezes completely banished by the following Sunday, the heat turned up into a blazing stillness, shade found under several canopies: a nice touch that was developed this year, offering greater potential for cover in this very exposed garden. The second Sunday's line-up was equally impressive, beginning with the Jeff Davis Authorities Trio, augmented by guesting guitarist Jonathan Goldberger, who surely must impose a completely different feel when set beside the core threesome entity, his electric effects blooming out the soundscape. Drummer Davis led an airy funk for this crispy 1pm heatstroke set, the threat of a meaner outbreak always muted, with the danger just implied rather than actually arriving. Instead, the direction swerved towards a rolling swinger of a tune, with Kirk Knuffke (cornet) and Matt Pavolka (bass) both returning in the next band, which was led by the latter player.

The Matt Pavolka Horns Band also exuded a certain funk-lope quality, but sadly this became a background for a sudden surge of family encampments, making concentration difficult due to the general hubbub. Such a festival as this is designed to be for everyone, of course, but some of these folks were audibly disinterested in jazz, and seemingly music in general. Pavolka's chosen approach was largely placid, but the band had grown an enforced status as backgrounders, even if they were still appealing in their good taste. It was time to shift trestle tables...

Drummer Ari Hoenig surely promised a volatile shift in the afternoon's mood, but his trio set was nowhere near as riled up as one of his typical Monday night sessions at Smalls jazz club in Greenwich Village. Even so, this was as after-hours as it could get in the shimmering sunlight! Hoening made a trip from standards to his original compositions, initially soporific, but then starting to liven up, the themes becoming increasingly angular and driving.

The second day's highlight was the boiling set by saxophonist James Brandon Lewis, whose trio had already kicked some unpredictability into the Vision festival in the previous week. His free-form contortions made a radical change to the nature of the afternoon, with stippled abstractions landing into an Afro-reggae bounce, suggesting similar zones to those explored by British combos Melt Yourself Down and Sons of Kemet. Lewis frequently locked together with bassist Luke Stewart, whilst drummer Warren Trae Crudup III shot scattering patterns hither and thither.

This was all mighty fine, but probably not to the advantage of the closing Bobby Previte and his Visitors. The drummer also dealt in around-midnight sneaking, studied and slow, with a 1960s organ tone, emerging into 1970s prog rock decorations. Michael "MK" Kammers spent some time playing saxophone, but it was his hard- driven organ sounds that impressed the most, even as the usually intense Mike Gamble's guitar was kept on its leash, this time around. Here was another strange-in-sunlight sound, a set that would have probably been more at home in a deep, darkened basement at 2am.

So, in the end, Sunday number one provided the superior run, but the second weekend featured a busier crowd volume, complete stillness in the air, and absolutely no pickles...