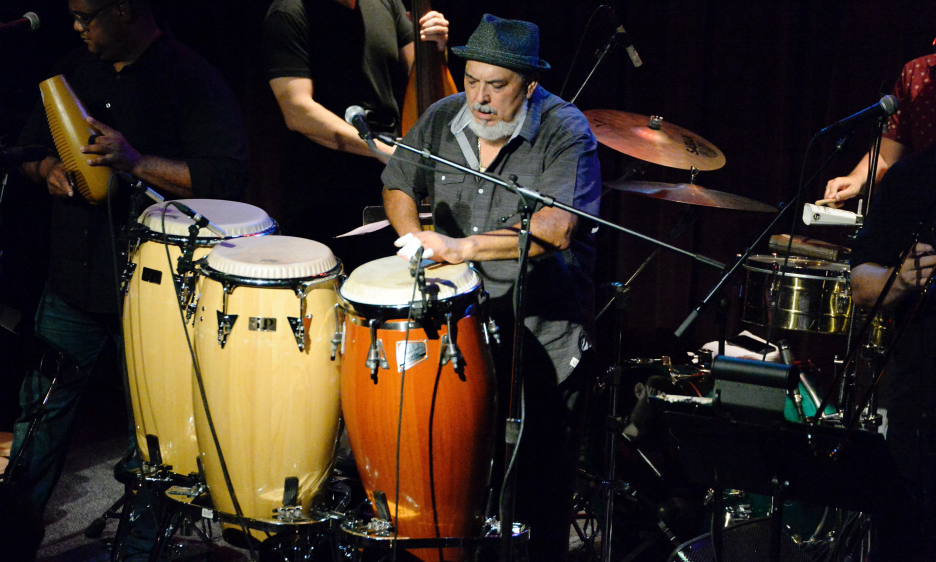 By Jack Gold-Molina
September 24, 2022
Sign in to view read count

Sanchez was ardently faithful to his influences and they were clearly evident in his own musical voice.

Poncho Sanchez and his Latin Jazz Band performed two sets at Dimitriou's Jazz Alley on Friday, August 12th. Still touring to support 2019's Trane's Delight, they have faced numerous cancellations and delays due to COVID restrictions. As Mr. Sanchez pointed out, between the time that the album was released and he was finally able to schedule dates to support it, it had been nominated for a 2021 Grammy.

Sanchez and his band covered nearly 60 years of music between both sets. Fluid and energetic, they effortlessly quoted such legendary players as percussionists Ray Barretto, Tito Puente and Willie Bobo, guitarist Wes Montgomery, saxophonist Lester Young, and perhaps the greatest jazz composer of all time, Duke Ellington. Starting with the swinging "One Mint Julep" from his 2003 James Brown tribute Out of Sight and the mid-tempo "Sambia" from 2001's Latin Spirits, the band laid down a solid groove that stayed relentless and dynamic through the entire evening. "Half and Half" from the 1984 release Bien Sabroso! alternated between Rumba Columbia in 6/8 and a fast mambo in 4/4 time, switching off against fierce saxophone soloing, picking up in tempo until the tune's explosive end.

When introducing the "Willie Bobo Medley" from the 2009 Psychedelic Blues album, Sanchez talked about how Willie Bobo had worked for Machito as a band boy in his early teens. Because he had also occasionally sat in on bongos, it was suggested by Mongo Santamaria that Bobo replace Machito's bongo player because he was more reliable. When he was later in Tito Puente's band, Bobo would take over on timbales while Puente played vibes.

The band laid into a fiery rendition of the medley with Sanchez singing, Pérez on timbales comping with Hardt on saxophone to lead into the chorus of "Fried Neckbones and Some Home Fries." After Langham and Blake traded cooking solos on piano and trumpet, respectively, Torres took over on trombone with Pérez riffing and comping on timbales to drive the tune through pounding versions of "Guajira" and "Spanish Grease."

A master conguero, Sanchez leaned more toward conversational elements and form versus flash in his playing. Sanchez was ardently faithful to his influences and they were clearly evident in his own musical voice. Having been raised around straight ahead jazz, Latin jazz and American soul music, he got his start working his way around the club scene in Los Angeles as a conga player. In 1975, at the age of 24, he joined Cal Tjader's band where he stayed until Tjader's passing in 1982.

"I learned a great deal from Cal," Sanchez is quoted as saying on his website. "It was the way he conducted himself, the way he talked to people, the way he presented himself onstage. He was very elegant, very dignified, and when he played, he played beautifully."

As Sanchez said to me after the second set at Jazz Alley when we were talking about the great Elvin Jones, "That's what we do."