Poncho Sanchez Latin Jazz Band Dimitriou's Jazz Alley Seattle, WA August 12, 2022 Poncho Sanchez and his Latin Jazz Band performed two sets at Dimitriou's Jazz Alley on Friday, August 12th. Still touring to support 2019's Trane's Delight, they have faced numerous cancellations and delays due to COVID restrictions. As Mr. Sanchez pointed out, between the time that the album was released and he was finally able to schedule dates to support it, it had ...

After a seven-year hiatus Poncho Sanchez pushes through with a passion project and a meaningful tribute to one of his mentors, saxophonist John Coltrane, on Trane's Delight. The feeling of jazz comes together beautifully in this tribute to Coltrane as well as in the remake of the Duke Ellington classic “The Feeling Of Jazz." Sanchez and his award-winning band succeed with a very smooth and classy salsa sound. The horn section blows splendidly on the melody, along with ...

For over 30 years, conguero/bandleader Poncho Sanchez has been the premier proponent of West Coast Latin Jazz. Growing up in Norwalk, California, Sanchez was exposed to and influenced by two very different styles of music: Afro-Cuban music and bebop, as well as R&B. Originally a guitarist, Sanchez taught himself the flute, drums, and timbales before finally deciding to pursue conga playing in high school. In 1975, Sanchez's idol, vibraphonist “Cal Tjader invited him to perform with his band. Sanchez played ...

Poncho Sanchez Latin Jazz BandKoerner HallToronto, OntarioMarch 9, 2013After not playing in Toronto for quiet a few years, fans were finally able to enjoy the wonderful talent of master conguero Poncho Sanchez, together with his Latin Jazz Band and featuring, on this particular occasion, young lion {m: Christian Scott = 15401}} on trumpet. For the 2012-2013 season, the Royal Conservatory has programmed a series of performances, Devoted to Dizzy. This particular night was billed as ...

Poncho Sanchez is the state of the art in Latin Jazz these days. Since the passing of Tito Puente in 2000, Sanchez has ascended to the top of the list of active players in terms of popularity, exuberance and the undeniable authority of his Latin rhythms. By the end of Sanchez' second set Monday night at the Botanic Gardens, the only ones not dancing ... 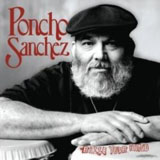 An album reflects an artistic personality; the creative mixture of past influences determines the current output. When Concord Records acquired the Rhythm 'n Blues label Stax, percussionist Poncho Sanchez gained access to musicians and repertoire that shaped his musical identity. This provided Sanchez the opportunity to paint a fuller picture of his artistic background. On Raise Your Hand, he brings his Latin jazz group together with several guest artists to mix Latin jazz, Salsa, and classic Rhythm 'n Blues tracks. ...

Poncho Sanchez is the Energizer Bunny, or maybe the Cal Ripken Jr., of Latin jazz. Since 1982, the veteran conga player and bandleader has turned out consistently excellent, high-octane albums on an annual basis for Concord Picante, some two dozen so far. His latest, Do It!, doesn't mess with the formula that's made Sanchez's group one of the most popular Latin jazz bands in the world. The nine-piece band is a crowd pleaser, offering a bit of ...