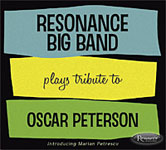 Oscar Peterson was a jazz giant whose career spanned from the late '40s until not long before his death in late 2007. When Resonance owner George Klabin conceived this big band tribute, he made an unusual choice: Marian Petrescu, a Rumanian native, who had appeared as a sideman on guitarist Andreas Oberg's earlier CD for the label. Klabin heard the Peterson influence in Petrescu's playing and thought it would fit in with the collection of West Coast all-stars, along with Oberg, that he hired for the sessions.

Two possible mistakes were avoided. For the most part, standards readily identified with Peterson's regular repertoire were bypassed in favor of less frequently explored pieces. Also, Petrescu's technique is similar to Peterson's but he doesn't attempt to recreate the master's touch, though he enjoys his solo romp through the pianist's "A Little Jazz Exercise."

A spry chart of Ray Brown's "Waltzing is Hip" (erroneously credited to Peterson) alternates the focus between Petrescu and the band, with a few breaks for drummer Joe La Barbera (of Bill Evans' final trio). Peterson's ballad "L'Impossible" is an overlooked gem from the mid '60s, featuring Petrescu's bluesy, intricate solo with the horns intermittently in the background. The medley of Peterson's gospel-flavored "Hymn to Freedom" and a swinging take of "John Brown's Body" (inspired by "The Battle Hymn of the Republic") find the band afire, with Oberg scatting in unison with his guitar on the latter. The musicians sizzle in the peppy interpretation of Oscar Pettiford's classic bop vehicle "Tricotism."

Arrangements are by Bill Cunliffe, Claus Ogerman and Kuno Schmid, who each conducted their respective charts, and a brief DVD documentary is included, providing some insight into the creative process. A follow-up recording is easily merited.