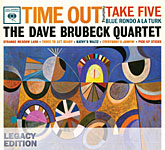 The year 1959 could easily go down as the one of most important years in the history of recorded jazz. In addition to Miles Davis' Kind of Blue (Columbia), it saw the release of the Dave Brubeck Quartet's groundbreaking LP Time Out. Columbia Records got the risky inclination to release the album's third track, the Paul Desmond-penned title song, as a single and it went on to become the first jazz single to sell one million copies.

Despite the fact that "Take Five" might be one of the top three most-recognized jazz recordings ever, the album's history shows that it almost wasn't even released. According to Brubeck (in an interview included on a bonus DVD), Time Out made Columbia executives extremely skeptical on three major counts. First, Brubeck wanted to feature nothing more than an abstract painting on the cover. Second, the execs feared the album's groundbreaking, unconventional time signatures wouldn't hold up in dance halls. Third, all of the tunes were originals, meaning standards like "Stardust" and "Body and Soul" wouldn't pad the more unfamiliar works. Luckily, company President Goddard Lieberson believed in Brubeck's vision, resulting in what remains today as one of music's undisputed masterpieces.

The aforementioned DVD that comes with it includes a 30-minute interview conducted in 2003 with a lively and reflective Brubeck where he discusses in great detail the album's origin, as well as that of each individual track. The DVD also features an interactive, multi-angle "piano-lesson" where the viewer can toggle through four different camera angles that simultaneously shoot Brubeck performing a solo version of "Three to Get Ready."

The crown jewel of this edition, however, has to be the bonus disc featuring the same quartet from Time Out in various performances at the Newport Jazz Festival in 1961, '63 and '64. It's hard to describe the thrill of listening to this classic ensemble playing at its very best and to audiences whose enthusiasm equals that of the performers on stage. Highlights include the haunting, noir-ish "Koto Song," as well as Brubeck's magnificent solo work on "Pennies From Heaven."