By Mark Corroto
February 11, 2013
Sign in to view read count 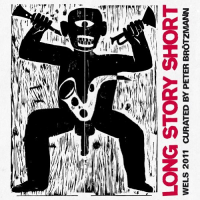 Whether you have no experience with the Godfather of free jazz or you measure your Peter Brötzmann CD and LP collection in linear feet, this 5CD box curated by the German saxophonist is either a great introduction to or an affirmation of his music and influence.

Organized on the occasion of his 70th birthday, these four days of performances in November 2011, also marked the 25th anniversary of the Unlimited Festival in Wels, Austria. Brötzmann did not assemble a retrospective of his ouevre, as there were no recreations of the fabled Machine Gun (FMP, 1968) sessions, Globe Unity Orchestra, or Last Exit band (having said farewell to Sonny Sharrock in 1994), nor did he play duos with Han Bennink. He did, however, display his current tastes in music which over the last twenty years have embraced musicians not only from Europe but also from Chicago and Japan.

Brötzmann's Chicago Tentet performed twice at the festival and two lengthy pieces are presented here. The first is an eerie 26-minute performance with Danish saxophonist John Tchicai, who passed away within a year of this recording. He can be heard chanting "Everything can happen from one second to the next." The second was the Tentet's "Concert For Fukushima" performance with guests Otomo Yoshihide, Akira Sakata, Michiyo Yagi and Toshinori Konda. This release only captures Yagi's koto performance, about a quarter of the two hour performance. Will there be more of this music to follow?

While Brötzmann is featured prominently here, he leads only ten out of the eighteen groups. He also choses to present his current listening pleasures. The highlights of the non-Brötzmann groups heard are several. Joe McPhee's saxophone and trumpet accompanies Morroccian Gnawa musican Maâllem Mokhtar Gania, Fred Lonberg-Holm and Michael Zerang for some African trance music. Saxophonist Mats Gustafsson, perhaps the heir to Brötzmann's sound, dabbles in bits and bites of improvisation and electronics with Dieb13 and Martin Siewert. Masahiko Satoh delivers a rollicking and cogent solo piano piece that swaps Cecil Taylor runs with stride tones and fragments of classical delivery. Brötzmann's influence can also be heard in the koto, cello and guzheng (a Chinese plucked zither) trio of Michiyo Yagi, Okkyung Lee and Xu Fengxia, as the three blast off into a freeform ethereal sound. The highlight of the non-Brötzmann ensembles might be the DKV Trio of Hamid Drake, Kent Kessler and Ken Vandermark augmented by Mats Gustafsson, Massimo Pupillo and Paal Nilssen-Love. The trio-cum-sextet sketch a restrained improvisation that is more listening than playing, before their rocked-out climax of sound.

The festival goers and connoisseurs of the great man's work are treated to various permutations and combinations of his music. His three-saxophone improvising band, Sonore, with Ken Vandermark and Mats Gustafson, marks its tenth anniversary working together here, as does the relatively new saxophone/piano/drums trio of Brotzmann, Masahiko Satoh and Takeo Moriyama. His acclaimed duo with Chicago vibraphonist Jason Adasiewicz is augmented here by drummer Sabu Toyozumi. The percussionist adds locomotion to the duo, plus he spikes the intensity.

Another new-ish Brötzmann saxophone trio, with bassist Eric Revis and drummer Nasheet Waits, is the most conventional approach heard here. Although it is far from conservative, the thirty-seven minute piece might be a nod to American free jazz as opposed to the European approach Brötzmann has championed most of his career.

The emotional and aural high points of this box set are the two pieces, one by Brotzmann's electric band Hairy Bones and the other by the African influenced ensemble that reunites him with bassist Bill Laswell. The latter piece includes Hamid Drake and guembri musican Maâllem Mokhtar Gania. While this piece hypnotizes the ear for nearly fifty-two minutes, the Hairy Bones improvisation clocking in at twenty-one minutes is an exhausting barrage of sound and energy. Toshinori Kondo's electrified trumpet and Masimo Pupillo's electric bass battle Brötzmann and drummer Paal Nilssen-Love for stage preeminence. The music is both exhilarating and exhausting.

If six hours of music could possibly leave you wanting, this collection does.