Thomas Fonnesbaek: Sound Of My Colors 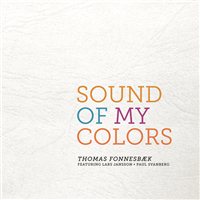 Fonnesbaek wrote nine songs for this, his debut album as leader, and decided the groove for all 12 numbers. The result is a more rhythm- driven music than the trio's usual meditative fare stemming from Jansson's Zen Buddhist beliefs. He contributed just one number, a funky tribute to Fonnesbaek, "El Bajista" (The Bassist). There are two standards, Gershwin's "Summertime," followed shortly afterwards—appropriately—by "Autumn Leaves."

In his sleeve note, Jansson sets the tone for the album. He says, "Thomas Fonnesbaek's music has a lot of strong grooves... nice chords to blow on." This is probably the closest the trio will come to a straight-ahead blowing session. Though, that said, the music they perform remains full of interest.

Fonnesbaek kicks off with one of his own numbers, the up-tempo "You Never Know," laying down a dark, brooding riff. Jansson's first solo is competent, the second magnificent. It all ends too soon in a clash of Svanberg's cymbals. "New Hope," another original, is a beautifully lilting ballad that also allows Jansson to stretch out, only this time in quieter, more contemplative fashion.

"Summertime" is given pretty muscular treatment with some brilliant work by both Fonnesbaek and Jansson, again particularly in his second solo where he goes further and further from the familiar melody and resists the temptation to return to it at close of play.

"Diversity" is a solo showcase for Fonnesbaek and it's a tribute to his technique and musical taste that it never becomes boring. "Green As D-minor," is a very relaxed ballad with bluesy inflections that slowly picks up momentum, with Jansson at his very best.

"Primordial" has some surprising twists and turns and "You And Me" is a wordless love song. As for "Autumn Leaves," written by Hungarian- French composer Joseph Kosma and first featured in the 1946 Yves Montand film Les Portes De La Nuit (Gates Of The Night), the trio take it apart and put it back together again, propelling it—in true Zen fashion—smack into the present moment.