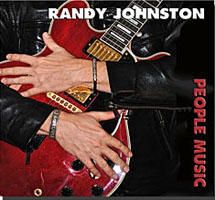 Perhaps more than any other musical instrument, the guitarists of today come drenched in the music of highly diverse musical genres. The instrument has been a fulcrum of expression, from folk, country and blues to jazz and rock—with a smidgen of classical thrown into the mix as well. Thinking about it, the task of developing as a guitarist has got to be daunting, with all of those musical bases to cover.

With People Music, celebrated guitarist Randy Johnston demonstrates that not only has he been exposed deeply to these forms, but that he is truly masterful at exploiting the very best of each. The CD is a stellar showcase, generously displaying Johnston's technical and improvisational virtuosity as well as his breadth.

Originally from Detroit—that Midwest melting pot of musical forms—Johnston grew up from age 13 in Richmond, Virginia. The Motown soul-funk-jazz juices mingled with his Southern blues experiences and the developmental result is an extraordinary talent. A vaunted sideman, he's recorded with artists including Ira Sullivan, Houston Person, Joey DeFrancesco, Etta Jones, and another speedballer, Johnny Griffin.

Johnston's jazz technique is crisp, highly direct and focused. His longer lines mesh intelligently with shorter pulse-bursts and his technique never overshadows musical content. And, when organ phenom Pat Bianchi joins in with his earthy B3 sound, the result is jazz-tinged heavy blues. The paring of Johnston with Bianchi is brilliant, as each plays off the other's significant technical chops. The timbre of Johnston's hard-picked strings with Bianchi's foot bass and blistering hands is a joy. The opening "Garden State" displays foot-pounding drive, while the shuffle blues "Nostalgia for What Never Was" advises that, at its core, Johnston's blood runs blue. The vampish "Chavez," sextuplet-metered and more cerebral than the other cuts here, allows both Johnston and Bianchi to stretch out modally.

Johnston offers up two organ-supported vocals with Mose Allison's "Parchman Farm" and "Trouble." While Johnston's singing is not up to his superior guitar playing (how could it be?) these selections offer an earthy funkiness,s with Ray Charles-ian overtones. Johnston's rock-blues style embraces Wes Montgomery and George Benson with his octave work in his solos. "Everyday Heroes" has a kick-off-the-shoes, "Sittin'-On-the-Dock-of-the-Bay" feel.

Drummer Carmen Intorre, Jr. sets up Chick Corea's "Humpty Dumpty," the burner of the date, before Bianchi takes off and demonstrates he can swing and develop cogent "Giant Step-like improvisational ideas superbly. Intorre is wise enough to give support to these cookers without stepping on their toes. Eddie Harris's "Cold Duck Time," a vintage rocker for sure, gets a fun funk revisit and closes out a superior effort.

People Music has a sincerity about it that's hard to top. The playing is absolutely first-rate and highly approachable. And there is a solid respect for the jazz and blues: after all, those genres developed from "people music," and the people playing here do so with respect, gusto and consummate soul.