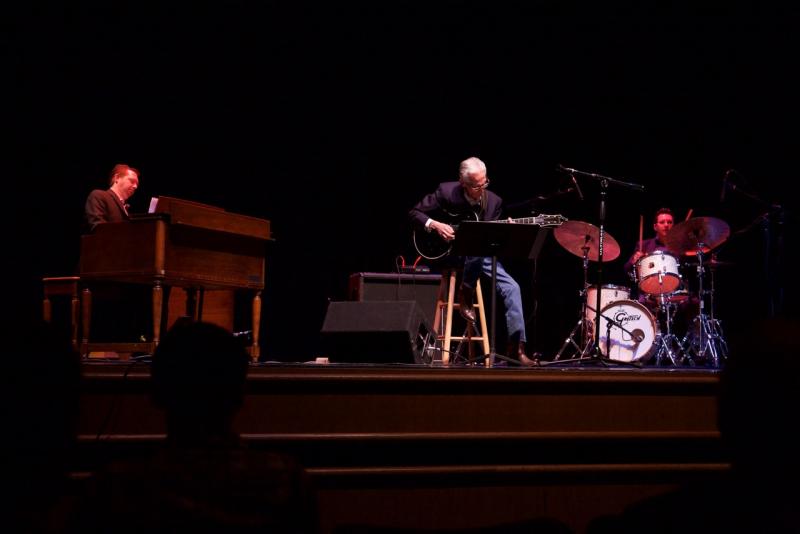 In the 1960s and 70s, spurred on by the support he received from the great Les Paul, a youthful guitarist Pat Martino evolved his unique style of controlled intensity, "fat" sound, and adherence to the blues idiom he acquired from his work with tenor saxophonist Willis "Gator" Jackson and organists such as Don Patterson, as well as from his hero, guitarist Wes Montgomery. Since then, despite the interruption in his career in the 1980s due to brain surgery, Martino has consistently maintained that same style while incorporating the vocabulary of bop, post-bop, fusion, and other developments as they came along. In this concert at Bucks County Community College, he and his trio that includes organist Pat Bianchi and drummer Carmen Intorre delivered a strong, straight ahead sampling of Martino's fast-moving and disciplined sometimes "jaw- dropping" approach. The set consisted of tunes familiar to Martino aficianados over the years: two originals along with standards by Sonny Rollins, Duke Ellington, Wes Montgomery, Wayne Shorter, and John Coltrane.

On the morning of the concert, Martino gave an on- campus master class for students, guitarists, and other musicians that could as well have served as an orientation to the show itself. In addition to describing his now famous use of augmented and diminished chords for efficient and creative guitar improvisation, he spoke about a broad-based approach to the guitar which embodies his hard-earned understanding of life itself and which he described in his autobiography with Bill Milkowski, Here and Now! (Backbeat, 2011). He suggested that improvising is part of the process of living in the moment rather than the past or future, almost the way a child plays spontaneously with whatever is at hand. Consistent with this philosophy, he regards the guitar (to which some ascribe almost mystical significance) as a mere "utensil," comparing it to a spoon that you use to stir a cup of coffee. It serves a purpose, and once you grasp it, you can easily use it. (Although Martino learned the guitar almost instinctively, it took hours and years of practicing and performing to get where he is, so the analogy to a coffee cup and spoon doesn't quite tell the whole story!)

The concert itself served as a prime illustration of staying in the now and the guitar as a useful tool. Martino came on stage with his cohorts Bianchi and Intorre, picked up his signature Gibson guitar, and from then on, it was total concentration on the music -no tricks with amplifier or synthesizer, no clever twists and turns -just focus and flow from beginning to end. Only a very few of even the greatest jazz masters can do this on a consistent basis. Coltrane, Oscar Peterson and Sonny Rollins immediately come to mind in that respect. The music just emanated continuously from them. That was the way it was on this night with Martino and his group. It also speaks to the competence of Bianchi and Intorre, who groove so well with Martino.

The concert began with Martino's compositions "Lean Years" and "Inside Out" (both available on Undeniable: Live at Blues Alley, High Note, 2011). "Lean Years" is a classic from the 1960s (Strings, Prestige, 1967), and Martino endowed it with the right amount of easy-going energy and a rich sonority, both of which stayed with him through the entire set. "Inside Out" is an easy-rolling symmetrical tune with a Wes Montgomery flavor for which Martino gave plenty of room for Bianchi to shine. Bianchi shows a bebop influence, emphasizing single lines with the right hand, for which his left hand and Martino did the punctuation. Not as flashy and florid, as say Joey DeFrancesco, his lines are yet superbly smooth and blend well with Martino's. The bebop influence was helpful in Martino's swift, sharp rendition of Sonny Rollins' "Oleo," which in this rendering could well have been written by Charlie Parker. Ellington's "In a Sentimental Mood" featured rapturous solos by Martino, once again showing his under-recognized exceptional ways with ballads. Montgomery's "Full House" is a staple at Martino performances, and shows how much his playing is influenced by Wes. Then, the group's rendition of Wayne Shorter's "Footprints" emphasized the blues idiom more than it reflected Shorter's modal improvising.

The concert concluded with a rousing version of Coltrane's standard, "Impressions," the climactic conclusion of which provided a contrast to the cool, held back feeling that preceded it. Bianchi, Intorre, and Martino did brilliant solos that showed how much they "own" this tune and how it freed them from the earlier constraints. Intorre, in particular, let it all hang out on drums, and the group brought the evening to an exciting conclusion meriting the standing ovation they received from the audience.

Bucks faculty members, pianist Jeff Baumeister and guitarist John Sheridan deserve special credit for cordially hosting both the master class and concert with the help of their warm, friendly staff and for providing Martino with the reverence and respect he deserves and of which jazz musicians unfortunately are too often deprived. Kudos must also be given to the facility itself, the Kevin and Sima Zlock Performing Arts Center on the Bucks campus, an especially comfortable concert venue with excellent acoustics and a large but not overwhelming stage that perfectly accommodated the musicians.