Les Paul is a unique blend of musician and inventor. His performing career started at the age of 13 and by the early 1950s he was the greatest jazz guitarist of his generation. As an inventor, Les Paul's breakthrough creation of the solid-body electric guitar paved the way for electric music made the sound of rock and roll possible. In 1953 while performing with Bing Crosby, he perfected the first multi- track recording machine, allowing separate lines of instrumental music and vocals to be blended together. His many recording innovations--including sound-on-sound, overdubbing, reverb effects, and multi-tracking--greatly accelerated the advancement of studio recording.

One of the most influential figures in the development of modern music-making, Les Paul developed an interest in both music and electronics very early in his life. Born in Waukesha, Wisconsin in 1915, by the age of nine he started teaching himself the guitar (having already tackled the harmonica and moved on from the piano and the banjo) and constructed his first crystal radio; within a year he had fabricated a primitive recording machine out of parts culled from a Cadillac and a dentist drill. By 13 he was performing semi-professionally as a country musician and began pursuing experiments to electrically amplify his instrument. Initial attempts involved the use of a record player needle, the earpiece from a telephone, and cannibalized radio components. Years later, the system was perfected with the replacement of the hollow guitar body with a solid block of wood: one of the earliest designs for what eventually came to be known as the solid body electric guitar.

During his high school years Paul became a member of Rube Tronson's Cowboys, and shortly afterwards dropped out to work full-time with Wolverton's Radio Band on radio station KMOX in St. Louis. By the 1930s he had relocated to Chicago, where he began his recording career using the hillbilly persona of 'Rhubarb Red', maintaining at the same time a parallel career in jazz as Les Paul. His first trio was assembled in 1937, but the following year he moved to New York to work as a featured player on the radio broadcasts of Fred Waring's Pennsylvanians -- a job that was brought to an abrupt end in 1941 when he was nearly electrocuted during a session in his basement. On a more positive note, 1941 also saw the creation of the "The Log", the culmination of his efforts to create an electric guitar. The formation of a new trio and another change in his base in operations (this time to Los Angeles) and had taken place by 1943, the latter resulting in a fortuitous, last-minute enlistment as guitarist for the first of the Jazz at the Philharmonic events in 1944.

While in Los Angeles Les Paul began his association with Bing Crosby, who not only featured Paul and his trio on his radio program and several of his records, but also became one of the key supporters of the guitarist's experiments in recording technology. Having come into the possesion of a captured German tape recorder, Paul quickly elaborated on the basic design and created a device that allowed him to layer (multitrack) parts; the first public result was the complex, eight-guitar piece “Lover,” released by Capitol Records in 1947. The subsequent popularity of the song added considerable momentum to his career, but a serious car accident not long afterwards very nearly brought it to a permanent end: a year-and-a-half was required to fully recover from the ordeal, and even then Paul was only able to continue his work because he had convinced his doctors to set his shattered right arm in a guitar-playing position.

In the 1950s a return to action was made through his collaborations with singer Colleen Summers, whom he had given the stage name Mary Ford and married in 1949. Utilizing a groundbreaking 8-track home studio system to layer Ford's vocals as well as his guitar, the two recorded a series of top ten singles across the next five years, some of the best-remembered being “How High The Moon,” “Mockin' Bird Hill,” and “Tiger Rag.” A television showcase, The Les Paul and Mary Ford at Home Show, ran between 1953 and 1960. By 1950 Paul had also secured a deal with Gibson to market the "Les Paul" model solid body electric guitar; the guitarist had approached the company much earlier after the refinement of his "Log", but shrewd business minds resisted the idea until it became clear that it was a commercially viable 'product'. The first Gibson Les Paul was made available in 1952.

After his divorce from Ford in 1963, Les Paul largely retired from recording, occasional exceptions including “Les Paul Now,” (1968) and a pair of collaborative records with Chet Atkins, “Chester & Lester,” (1976) and “Guitar Monsters” (1978). In 1984 he once again resurrected his trio and initiated a weekly showcase at Fat Tuesday's in New York City, which endured until 1996 when the hosting venue was moved to the Iridium Jazz Club. The performances at Iridium continue to the present day, regularly featuring well-known guests from the different generations of musicans that have benefited from his innovations and influence.

In 2005 Les Paul at the age of 90, issued “Les Paul & Friends, American Made, World Played,” his first newly recorded album in 27 years (the last one being his collaboration with Chet Atkins in 1978), and it's a classic rock guitar version of a duets project, where Paul is joined by superstar friends, as a fitting tribute to the man behind the Les Paul guitar. The record won two Grammys!!

The Gibson Les Paul Model, as it was originally called, has changed little since its debut in 1952. Except for an updated bridge and humbucking pickups, the Les Paul Standard of today is still the same guitar. The Les Paul has been the driving force behind many changes in popular music. It powered the blues rock sound of the late '60s and the southern rock of the late '70s. By the '90s the Les Paul was providing signature sounds for every genre of rock, from alternative to metal. Show less 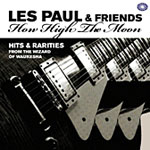 The Genius Of Les...

All About Jazz musician pages are maintained by musicians, publicists and trusted members like you. Interested? Tell us why you would like to improve the Les Paul musician page.