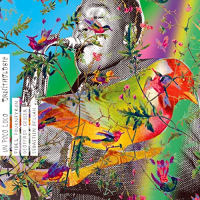 Somewhere Han Bennink is very jealous of the music making of the trio Un Poco Loco. The master of 'New Dutch Swing' hijinks would give his right crash cymbal to perform music in the manner this trio covers Charlie Parker on Ornithologie. The aptly designated Un Poco Loco ('a bit crazy') trio is trombonist Fidel Fourneyron, saxophonist and clarinetist Geoffroy Gesser, and bassist Sebastien Beliah. All three musicians are also members of the Umlaut Big Band, which focuses on 1920s and 30s dance music. Here they jump forward to the 1950s bebop of Charlie Parker and Dizzy Gillespie. With trombone, reeds and bass, the result is more postmodern than imitative; that is what gets Bennink's mouth watering.

Ornithologie is the trio's third release following their self-titled 2014 original and the follow up Feelin' Pretty (Umlaut, 2017), which reimagined Leonard Bernstein's musical West Side Story. Their music is comparable to that of saxophonist John Zorn's News For Lulu trio with guitarist Bill Frisell and trombonist George Lewis. News For Lulu covered the hard bop music of Kenny Dorham, Sonny Clark, Hank Mobley, and Freddie Redd without a rhythm section. Un Poco Loco takes on bebop in the same manner Carl Stalling repurposed popular music, opera, and Raymond Scott's compositions for Warner Brothers' cartoons. The bowed bass that opens "Groovin' High" vocalizes an 'ah-ooh' sound before tracking the two horns through the melody, which itself skips like a broken record before slowing as if a thumb has been placed on the turntable. Breath-only through trombone begins "Salt Peanuts" before that familiar repeated incantation is deduced. The trio plays this music with all due respect to the original compositions. They've zhooshed the canon here. Amplifying "Ah Leu Cha" from a monologue into a three-way conversation, and mashed "Mango Mangue" into "Donna Lee." Same for "Barbillie's Time," where one can dig for treasures like "Billie's Bounce" and "Now's The Time." The music is fun, brilliant and purposely pleasing.