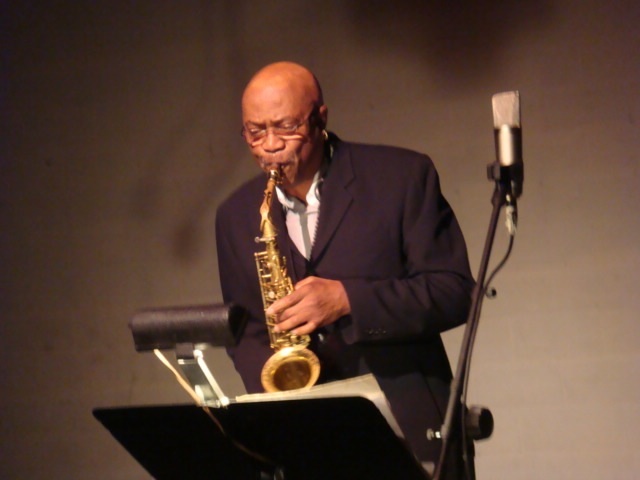 Saxophonist, composer, poet and painter Oliver Lake stands at the top of his profession alongside such giants as his contemporaries, multi-instrumentalists Anthony Braxton, and Roscoe Mitchell. His solo concert at Sushi Performance and Visual Arts was the final installment of adventurous curator Bonnie Wright's excellent "Fresh Sounds" series. Lake doesn't perform solo concerts all that often, so this was a rare opportunity to hear the man's music in the most intimate setting possible.

Lake emerged in the public consciousness in the 1960s as a founding member of the St. Louis collective, Black Artists Group, which shared many commonalities with the more well-known Chicago organization, the Association for the Advancement of Creative Musicians. Lake also gained considerable notoriety as an original member of the groundbreaking World Saxophone Quartet, back in 1977. Lake has acknowledged sixties reed icons Jackie McLean and Eric Dolphy as prime saxophone influences. In terms of compositional inspirations, he credits Duke Ellington and Julius Hemphill as important role models.

Friday night's concert was full of the compelling qualities that make Lake's music unique. Perhaps his most arresting feature was his superior overall sound. Lake's tone and timbre are his and his alone, and his performance was a master class in tone production and manipulation. Lake has a warm, full-bodied voice that is strong in all registers. When he chose to take that voice out, it remains centered, as he maintained a perfect balance between a honey-dripped timbre and one more slightly acidic. Several times during the concert, he navigated to the extreme edges of his instrument's capacity, but even then, there was calm at the center of his storm.

The evening began with the incredible "Flow," which featured a strong melody that repeated several times before abstracting to a degree where it became splintered and fragmented with overtones and multiphonics. The whole time, no matter how far afield Lake strayed, there was an underlying logic so strong, it was as if every scream and squeal was perfectly placed on an invisible timeline that insured it's "flow." Next up was "You Dance," which began with some flutter-tonguing, then straight into screaming, following its melody.

Lake often appeared to be playing the room as much as his saxophone. Sushi Performance and Visual Arts is a large room with a high cavernous ceiling and metal trusses. Lake seemed to have the room's crevices perfectly mapped. He knew just where to stand, and where to point his horn to maximize the effects of the space's reverberant dynamics. Several times he turned in a slow, 360- degree pirouette while blowing a long, held, tone, producing a fascinating phasing effect. Lake frequently recited his original poetry between songs, and while they were all excellent, several were fantastic. "Sound-Check" was an appropriately wry assessment of "professional" sound engineers, while "Breaking Glass" was a beautiful biographical portrait of his mother, who sounded like an inspirational example of hard work and business savvy.

Lake then surprised everyone with an up-tempo, furiously swinging version of Dolphy's, "Gazzeloni" from the reedman's epochal Out To Lunch (Blue Note, 1964). Lake's internal time clock and sense of rhythm was so strong that the absence of bass and drums was unnoticeable throughout the evening. Lake even delighted the crowd with his melodious singing voice on a poem, titled "What Do I Do?" Not surprisingly, Lake's singing, poetry reading and saxophone work all seem to be connected by his unique artistic vision.

Following a short intermission , the second set picked up where the first left off. Solo performances are inherently risky propositions: there's no one else to hand it off to, and it's hard for any one instrument to consistently engage the audience on a second-to-second basis. Lake's performance elegantly hovered above all potential pitfalls, though. The audience was enthralled; there was no nervous coughing, no glancing at the watches, just a roomful of mesmerized and active listening participants. Lake explored some Native American dynamics with his "Aztec," and reinvented the Swing era with "Jump Rope," which featured a intricate, swinging melody and as close to a traditional structure as his creative mind would allow.

Lake, who played alto saxophone for almost the entire evening, did pull out a beautifully shiny, curved soprano for one piece. He demonstrated a totally unique tone and approach to that instrument as well, and it would be fascinating to hear him on that horn more often. On this performance, he utilized racing scales and melodic fragments up the neck before engaging in a series of split-toned screams and squawks, with his penetrating upper register expertise.

This concert greatly exceeded all expectations. Lake doesn't tour all that often, and so anyone who loves and appreciates the state of the art in cutting edge music would do well to catch him anytime, and in any format—especially solo. Kudos to curator Bonnie Wright for facilitating one of the best concerts of 2010 in San Diego .