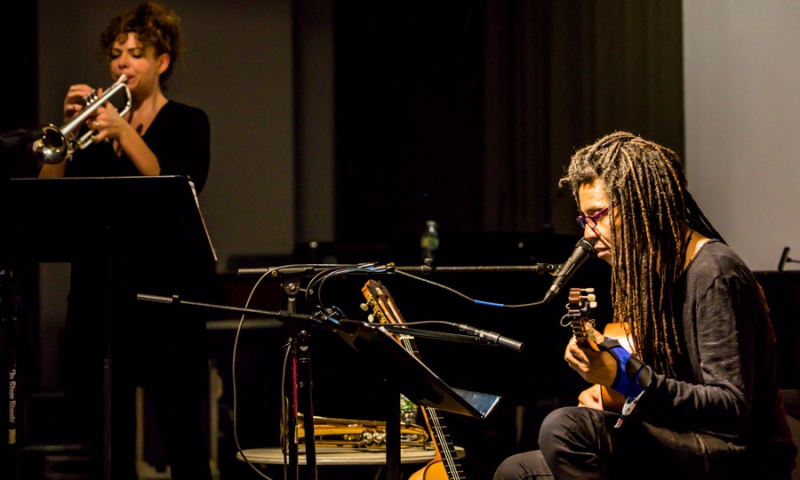 More than fifty different acts of all stripes and sizes took part in the Friday marathon and, between both marathon nights and the seven standalone events bookending them, approximately one hundred thirty groups appeared on the bill, speaking once again to jazz’s wide gaze and NYC Winter Jazzfest’s all-inclusive ethos.

As the setting sun ushered in the first of two NYC Winter Jazzfest marathon nights on Friday, January 12, the only thing that seemed to be missing was winter itself. After coping with a deep freeze for weeks, encountering an extreme thaw with the mercury making it into the fifties was somewhat shocking for those out and about for this annual event. In fact, it seemed to suck the very essence of the season from the air. But the spirit of this jazz happening was undiminished.

Talk of scaling back a bit preceded the fourteenth edition of this beloved festival, and the number of bands presented over the course of eight days supported such statements, but there was no shortage of incredible music to hear. More than fifty different acts of all stripes and sizes took part in the Friday marathon and, between both marathon nights and the seven standalone events bookending them, approximately one hundred thirty groups appeared on the bill, speaking once again to jazz's wide gaze and NYC Winter Jazzfest's all-inclusive ethos.

Those accustomed to bouncing around from venue to venue for the marathon had good reason to show-hop on this most unseasonable of Friday nights. Piano sophisticate Ehud Asherie was kicking things off with an early set at The Django, leading edge trumpeter Jaimie Branch was holding court with her artfully bold band at Nublu, breakout vocal up-and-comer Lucia Cadotsch was making her American debut at Zinc Bar, and the festival's artist-in-residence—flautist-composer Nicole Mitchell—was closing the stage at the Tishman Auditorium at The New School. That particular pathway nearly was mine, as it was one of a handful of scenarios sketched out in advance. But the virtues of staying put won out in the end.

The New School's Jazz Building on West 13th Street played host to two different stages and ten different acts over the course of the evening, proving to be a hospitable environment for taking in a wide variety of socially conscious and musically stimulating performances. Alexis Cuadrado opened up the 2nd Floor Theater, conducting a performance of his score to Charlie Chaplin's The Immigrant (Mutual Film Corporation, 1917) to a showing of the twenty-five minute film. Prior to starting, Cuadrado spoke at length about Chaplin's fate in the United States, the treatment of immigrants, and how this movie speaks to events in the present day. It was clear evidence that, while the world and the music have evolved over time, some things clearly haven't changed in the hundred years since this movie made its way to the public.

Leading a well-balanced dectet through his score, Cuadrado managed to highlight the goings-on in the film while also bringing a deeper sense of thought and purpose to the fore. After a dose of tension in the opening credits, dovetailing vibes and bass presented a jaunty theme, topsy-turvy ideals came forth to mirror a rocky sea voyage, hemiola happenings had their moment, and bass clarinet and muted brass traded thoughts. But the most striking moment may very well have been the reharmonized touch of "America The Beautiful" that connected with the sight of The Statue of Liberty. Upon its arrival, mixed emotions swirled through the room. Themes of anxiety, hope, and love followed, further connecting with Chaplin's work and society in the present moment. Standout soloists like trombonist Ryan Keberle elevated Cuadrado's work, but the performance was truly an example of the whole being greater than the sum of its highly expressive parts and personalities.

The next set, three floors above, proved to be the most animated of the evening. Drummer Ches Smith's We All Break explored a rite of rhythm in front of a full house. The fact that this percussion-heavy outfit inspired by the Port-Au-Prince variant of Vodou drumming was performing on the eighth anniversary of an earthquake that devastated Haiti, and at the moment when Donald Trump chose to denigrate foreign nations, was lost on no one. Smith and his fellow percussionists created a cascade of polyrhythms while pianist Matt Mitchell parsed out complementary thoughts that danced in time. Vocalist Nahomie Joseph and guest Anna Webber (on flute) added another layer (or two) of thought to the mix, but the interlaced drumming remained the focal point throughout this entrancing set.

As Smith's performance ended, The New Standards was midway through its show on the 2nd floor. That trio's modus operandi—coating pop songs in jazz language—resulted in a presentation that included a highly accessible take on Elvis Costello's "Watching The Detectives" and a taste of New Order. In an ingratiating but innocuous manner, the band, through song and speech, added a welcome dose of levity to the mix that was largely absent from any of the other sets under discussion here.

Vocalist Sara Serpa's Recognition followed, proving to be a singular multimedia experience both spellbinding and haunting in nature. Mixing the political and personal, Serpa explored the Portuguese colonization of Angola through a familial lens. Videos from Angola that were connected to her grandfather were woven into a stunning film-turned-backdrop produced by Bruno Soares. It wouldn't be inaccurate to tag the music that went with it as avant-chamber jazz, but it would do a disservice to the work as a whole to reduce it through any form of labeling. With the blend of Serpa's chimerical vocals, harpist Zeena Parkins' spectral flecks, and saxophonist Ingrid Laubrock's attractively austere lines working with the film, Recognition was truly beyond category.

Once Serpa relinquished the floor, some technical difficulties on the sound end of the equation held up the start of guitarist Brandon Ross' set in the same room. But the tedium that accompanied the long wait was eventually washed away in sound. Working with an expanded version of his For Living Lovers duo, Ross delivered Immortal Obsolescence—a series of pieces patterned after the tissue portraits of Venezuelan artist Carolina Muñoz. Each performance, whether spare, seductive, or standoffish, proved a trip into sonic symbology. Ross' guitar (and vocals) pondered and probed, bass guitarist Stomu Takeishi mirrored the leader's mindset, trumpeter Stephanie Richards' horn spoke to the human psyche, and drummer JT Lewis added a welcome sense of color and momentum.

The final set in the 2nd Floor Theater—a performance from Peter Apfelbaum & Sparkler featuring Bill Laswell on bass—presented music that looked to and elaborated on the sonic concepts demonstrated on that sui generis outfit's I Colored It In For You (M.O.D. Technologies, 2015). An evolved form of the "multidimensional electronic world music" conjured on that EP proved to be a heady brew in a live setting. Electric ideals, catchy horn lines, and vocal mantras-cum-melodies coalesced into an arresting and earthy offering. Apfelbaum's frontwomen—multi-instrumentalists/vocalists Natalie Cressman and Jill Ryan—received some well-earned attention, and guitarist Will Bernard brought his steady grooves into clear view. Laswell's guest appearance was one of rumbling resonance, as his bass seemed to speak of the underworld through his Ampeg stacks. This writer eventually opted to tap out before set's end, but the quality of the music had nothing to do with that decision. After six-plus hours, it was simply a matter of elation-induced exhaustion.