By Glenn Astarita
January 23, 2018
Sign in to view read count 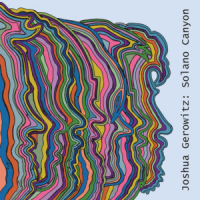 A non-exhaustive Internet search didn't reveal much in the way of biographical information on young guitarist Joshua Gerowitz, but on the opening track "Smooth as Ice," he would appear to be a potential jazz-fusion guitar hero. Atop a simple hook and a loose groove, armed with a significant bite, he weaves a stylization that nestles between experimental guitarist David Torn and Jimi Hendrix, as he shreds his guitar into miniscule bits, framed with malicious sounding EFX and sharp-edged phrasings. And Louis Lopez' gusty trumpet solo atop an ascending motif on the following track "Hamburger Island #1," imparts a brief and wily oeuvre featuring Carmina Escobar's wordless chants and a vibe that adjoins dark metal and avant-garde abstractions.

The band injects offbeat bluesy statements with unison phrasings along with other movements accentuated by the leader's crunchy, steely and mind-bending notes, abetted by rousing horn passages and extended note sorties. However, they invoke latter-day Coltrane on "Morning Landscape Illusion," which is etched on searching aspects and bassist David Trachina's sullen arco lines. Moreover, "Chicken, Cigarette, Bed #2," is another open-ended and blossoming work tempered by Lopez' softly woven notes, before Gerowitz raises the bar with his intense strumming towards closeout. Indeed, Gerowitz is a creative soul with hugely impressive chops, as his keen vision is assertively concentrated on blazing newer trails.