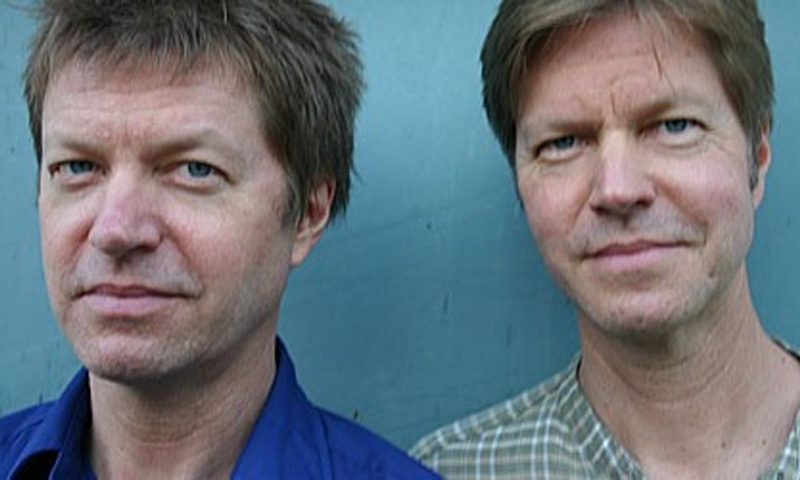 Nine years ago, Nels Cline and Alex Cline played live as a duo for only the third time ever. On January 13, just nine days after their collective 62nd birthday, they made it the fourth. The brothers Cline performed together at the Moss Theater in Santa Monica, near where they grew up. The event was partly instigated by their 62nd birthday, and partly by the series put on by The Jazz Bakery: Concerts and Conversations with Southern California Jazz Legends.

Alex initiates the show, back turned to the audience, ensconced in his drum kit and percussion instruments, facing a wall of seven gongs. He begins with a light a mallet strike to the rin gong resting on a small pillow next to him. Within the first minute, he has already primed each of his gongs to create a bloom that reverberates throughout the theater. As volume ebbs and flows through Alex's precise brushes and taps of cymbals, so too does Nels texturize the sound, manipulating his volume pedal for an electronic complement to Alex's all-physical percussion. The rise and fall of volume, the swells of notes, work nicely together as Nels shuffles through myriad settings between his two pedal boards, and Alex flutters across the surrounds of his kit. From the outset, the brothers Cline hint at the ambient and cinematic performance ahead.

"It will probably be very dynamic," Nels told me the night before the show, "because we like to play really quietly and then we like to play heavy, high drama. I wouldn't say excruciatingly loud but it may be a little dramatic and sonic." And that's exactly how the performance unfolds. They begin the set with ambient percussion and a chamber-like echo, highlighting the space of the theater rather than filling it. Immediately, a mood is established and this is where the brothers really shine. Alex says "the actual feeling that comes through the musical experience is the most important thing to me about making music." Nels says they are both "much more interested in orchestral types of concepts, sonically." Though they only approached this duo set with themes and no strict arrangements, the beginning of the show clearly sets the stage for the two finding a mutual equilibrium. Alex's thrumming gongs and Nels' silent swells create the feeling of approaching a temple preparing for ritual. But it is not long before they break into more vigorous music.

Nels confounds his own looping apparatus, layering intricate phrases over each other, warping their speed and pitch to complement the swell of Alex's percussive landscape. Notes from the guitar crackle over Alex's zig-zagging drums, challenging the ear to follow myriad sounds and at the same time requiring the seeming chaos to blend in order to be properly observed. Their free improvising becomes spidery, stormy, and cinematic. It is not difficult to imagine layering this music over a tense scene in a film; the grand scope and intense ambience of their performance belies the brothers' interest in the visual arts. No doubt there is something filmic and cinematic in their music.

The brothers incorporate past compositions and themes to loosely guide the music. Framing some of the music are Nels' songs "Squirrel of God" and "You Noticed," Paul Motian's "Conception Vessel" and Gary Peacock's "Moor." But it's really the adventurousness of the music that excites, rather than homages or glimpses of a recorded favorite. While the brothers now live on opposite coasts and play together infrequently, the unique intimacy that comes with a lifetime of playing music together—not to mention the harmony of their being mirror twins—is clear and present on this stage.

Their dynamic is vital and emotional, but while their synchronicity is impressive, it is far from flawless. Alex juggles brushes, sticks and mallets while Nels keeps track of his complex loops and pedal augmentations. But this mess produces something that will never be heard again. While the performance lacks the refinement or perfectly timed technical flourishes of strict composition, it opens up the mind and ears to an untamed artistic world, full of natural beauty, though challenging to navigate. And this is precisely the value of this type of music.

To add to the spontaneity and uniqueness of this performance, and of improvised music at large, Nels and Alex do not plan on making these duo performances much more than an off-and-on birthday tradition. All the more reason to celebrate their inventiveness in the world of adventurous music-making.

Aspiring journalist looking to gain reporting experience and to immerse myself in the LA jazz scene.