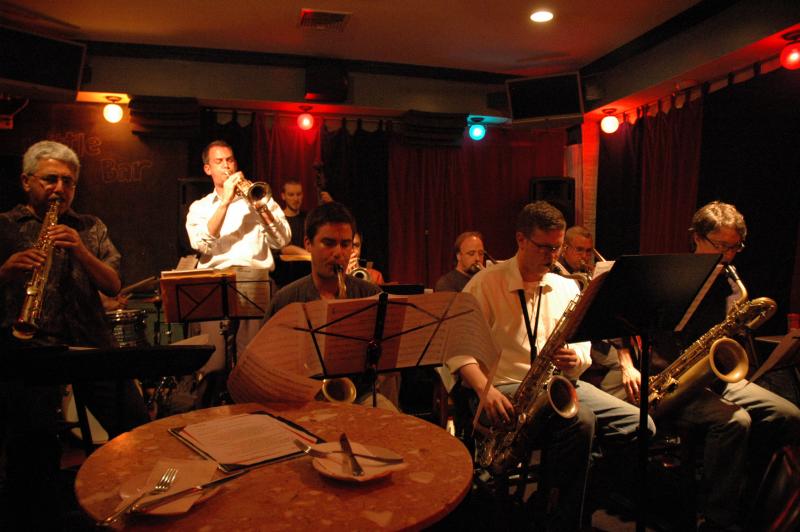 By Victor L. Schermer
June 11, 2011
Sign in to view read count
Norman David Eleventet
Little Bar
Philadelphia, PA
May 27, 2011
With the closing of Zanzibar Blue and Ortlieb's Jazzhaus, Philadelphia has lost two of its iconic jazz clubs, further diluting an already limited constellation of venues. So it's encouraging to see music coordinators Greg Matthews and Mike Boone taking up some of the slack via a jazz series they recently inaugurated at the Little Bar located at the corner of 8th and Fitzwater Streets in the South Philadelphia BellaVista section of the city, a short walk from the Italian Market, and across the street from a historical plaque memorializing the pioneering violinist Joe Venuti, a native of that area. Matthews and Boone are recruiting top notch jazz groups to play there, and they couldn't have done better than to feature Norman David's Eleventet, a grooving and swinging near-big-band that generates excitement and energy while achieving a modernism, precision, and altitude only possible with top players.
David has been leading this group for a few years, and as they find their groove and release their first CD, At This Time (Norman David/Coolcraft, 2011), they are deservedly being heard all over the Delaware Valley and beyond. They deliver a relentlessly swinging and ear-popping sound while at the same time offering nuances, subtleties, and creative ideas that generate interest for the more serious listener. David's lightly leavened "emcee" persona is deceptive, dissimulating as a somewhat shy suburban outcast, with wry humor so bad that it's good. Thus, it's a shock at first to hear how well this band delivers its grooving sophisticated sounds. David, known also as a clarinetist, plays a mean soprano sax with this band, while contributing superb arrangements of originals and standards that evoke echoes of great predecessors (for example, the Maynard Ferguson band, as well as shades of Duke Ellington, Glenn Miller, and the Gerry Mulligan Concert Jazz Band, perhaps its closest ancestral cousin), while maintaining a distinct sound of its own. That sound has the precision, timing, and expression of a small group along with the dynamic energy of a big band.

In this first of two sets at the Little Bar, the group began on top of the beat, with a hot, grooving David original, "Nor-Bop," with ensemble and section choruses punctuated by the flavorful soloing of Mike Cemprola on alto sax and Jon Barnes on trumpet. It was followed by another David composition, "Folding My Shirt," featuring Sandy Eldred on bass and Tom Lawton on piano. Half-way through this number, the group made a beautiful switchover from a hard bop to a cool mode, featuring a stunning solo by "Peppery" (a nod to Pepper Adams) baritone saxophonist Mark Allen Felton, who truly outdoes himself on his instrument, with brilliant inflections and twists to his playing.

"Buzz (Talk)" offered film noir undertones in which Sandy Eldred delivered an in-the- zone bass solo, leading up to astonishing soprano sax work by bandleader David, a solo that could have served as homage to John Coltrane, emphasizing interval jumps, and ending with a super-rapid run of the sort that typified Coltrane at his apogee. The set ended with "Quick, Change!" featuring one of Lawton's all-over-the-piano-free-association solos, then overshadowed by Carl Schultz' incredible tenor renderings that seemed to catalogue the history of the tenor sax, invoking shades of Lester Youngand Dexter Gordon, with an echo of the Ellington sax section thrown in for good measure.

Overall, this was a five-star show by a tight, grooving ensemble in a very comfortable new venue where the audience listens respectfully but cheers enthusiastically, where food and drinks are available but not the focus, and where, by design, sound and acoustics have been well- attended to. Hopefully, this all bodes well for the future of live jazz in Philadelphia.