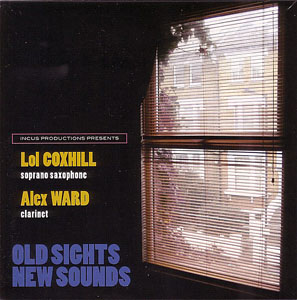 Recorded at Incus HQ, London, in October 2010, this duo is a delight that should refresh even the most jaded ears. Lol Coxhill and Alex Ward are both veteran improvisers and regular participants on the London scene, so it was inevitable that they would eventually play together as a duo. As evidenced below by YouTube, that happened in August 2010 at John Russell's annual Fete Qua Qua; the pairing was repeated the following month at Sybil Madrigal's monthly Boat Ting gig on the Thames (on the occasion of Madrigal's birthday, actually). After they repeated the success of their previous meeting, it was clear that the two should record together—so Karen Brookman asked them if they would for Incus; without hesitation, they each agreed.

The pairing of Coxhill and Ward is a far from obvious one. Despite Coxhill being the senior partner by over forty years, without forewarning it would be difficult to tell that from their music; both sound remarkably spry and lively—one of the joys of the duo. Just as important to its success is the instrumentation; Coxhill's soprano saxophone and Ward's clarinet are close enough in pitch to be highly compatible, yet their timbres are different enough for the two to be easily distinguishable, their individual contributions easy to separate. In addition, each plays their instrument straight, with no electronics or other effects, meaning that this is a text book example of "good old-fashioned improv."

Coxhill and Ward have playing styles that are remarkably similar, making them highly compatible as improvising partners. They each play free-flowing lines, seeking to compose spontaneous melodies, something at which they are often successful. For much of the time on these seven tracks, the two improvise simultaneously, following parallel paths that intertwine and interact, with neither leading nor following the other. By the slightest of adjustments they respond to and accommodate each other in subtle ways, giving the strong impression that telepathy is at work. A delight from start to finish.

Establishing Shot; Back Story; Angle On; Slug Line; Tight On; Pull Back; Dissolve.