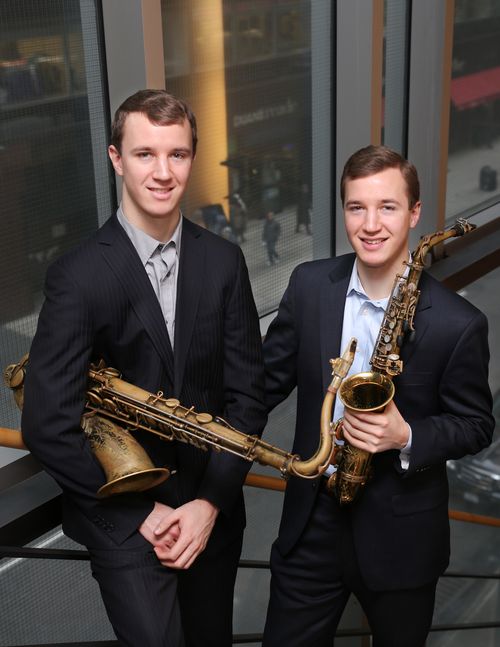 slideshow
There is a notable, and rather robust, roster of jazz-playing siblings through the years. A much leaner list of identical twins playing jazz shows that most play different instruments. That makes sense. If you are working together a lot as budding musicians, you need a variety of position players in a band.

Peter and Will Anderson are identical-twin rarities because they play the same instruments.* The saxophone-and clarinet-playing brothers brought their finely honed skills to the Charlotte County Jazz Society’s Artists Series on Monday, February 9. They performed in a non-traditional trio format with guitarist Alex Wintz.

The Andersons, now 27, dig into the standard jazz songbook with virtuosic skill and an uncanny ability to carry each other’s melodies and improvisations forward. The trio format worked well because the Bethesda MD natives alternated instruments most of the night (Peter on tenor sax or clarinet, Will on alto sax, clarinet or flute). Guitarist Wintz combined the rhythm roles of drummer, bassist and pianist rolled into one, with his solid, understated playing. The Andersons’ arrangements also had the brothers taking a complementary rhythmic role behind each other’s solos.

In this intimate format, never did the musicians coast. When the Andersons weren’t doubling on a melody, they were playing counterpoint or adding rhythmic patterns behind each other. They played clarinet simultaneously on two tunes, Cole Porter's “Begin the Beguine” and “Reed Reflections,” which New York-based composer and multi-instrumentalist Kyle Athayde wrote as a symphonic piece for the brothers.

There were several points at the concert where I closed my eyes when savoring their solos. It was almost impossible to tell when one brother stopped playing and the other continued the musical thread. Their clarinet sound draws most from Artie Shaw's rounded, mellow tone. As Peter reminded us in brief remarks, Shaw retired from the music business in at a rather young age because he got so sick of playing “Begin the Beguine,” his biggest hit, night after night. The Andersons’ talents and love of classic mainstream jazz made them many new fans in Port Charlotte. It was their first exposure to nearly all of the 300+ audience.

Footnote: While my brief research turned up eight sets of identical twins playing jazz, or in one case, smooth jazz, I only found one other set besides the Andersons who play the same instruments. They are St. Louis-based saxophonists Dwayne and Dwight Bosman, who have been working together for about 40 years.