SOURCE: UNIFIEDMFG
December 23, 2021
Sign in to view read count
In jazz circles, it's common knowledge that the best way to listen to jazz is in a live setting. But while most agree, some argue listening to jazz on vinyl is even better. In reality, there’s no way to judge which is best as they are completely different experiences, One thing is clear: it's hard to go wrong with both.

Vinyl has a crackle and pop that gives a warm feeling—almost like ASMR. And since it has uncompressed sound, the quality is closer to the real thing especially when they are pressed by great and reliable plants like Unified Manufacturing custom vinyl records. If you or someone you know is curious about taking a deeper dive into jazz, start by purchasing the best albums on vinyl! We've made some recommendations below to get you started. 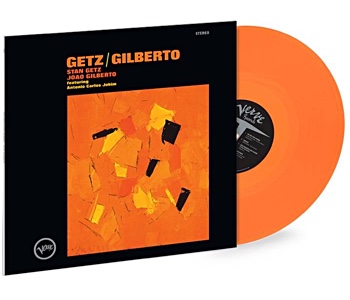 The Getz/Gilberto album released by Verve Records in March 1964 is a collaboration between American tenor saxophonist Stan Getz and Brazilian singer and guitarist Joao Gilberto. It also features pianist and composer Antonio Carlos Jobim who wrote and arranged every song. This album was one of the reasons for the bossa nova craze in the US, highlighted by “The Girl in Ipanema,” which helped it reach a global audience. On the eleventh of February 2007, Verve Records released a limited edition vinyl of the album. And in order to match the black background printed with an orange-dominated abstract art for the vinyl albums jacket, there was a 12-inch vinyl pressing for orange-colored records with a black center label. 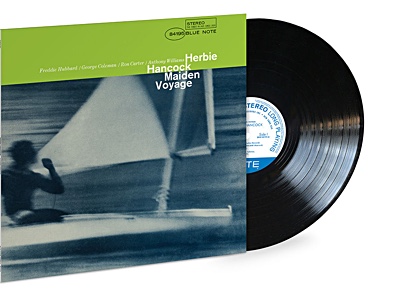 Herbie Hancock’s 1965 album, Maiden Voyage, is one of the best albums he has ever released. It has perfectly shown the Jazz musician's immaculate artistry to the point that it was presented with the Grammy Hall of Fame Award in 1999. The vinyl album is composed of a standard black heavyweight 12-inch vinyl record housed inside a single jacket printed with the original album cover. The album is purely analog since it was mastered by Kevin Gray from the original master tapes. This classic vinyl edition of the Maiden Voyage is soon to be released by Blue Note on June 4, 2022. 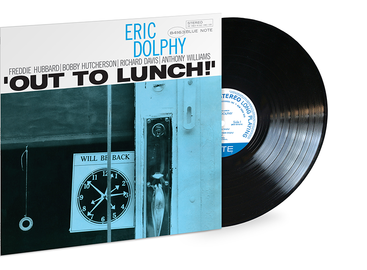 Though Eric Dolphy didn’t have the chance to extend his discography due to his early death at 36, I bet there were no regrets on his part. In a span of 15 years of a music career, Dolphy has introduced the world to his wonderful music and that’s what matters. One of his best works is his album debut on Blue Note, Out to Lunch Out to Lunch tracks were played and performed by the formidable quintet that Dolphy assembled. Last year, Blue Note released their “Blue Note Classic Vinyl Series” presenting 12-inch vinyl pressing for their artist’s old albums, and Out to Lunch was included. 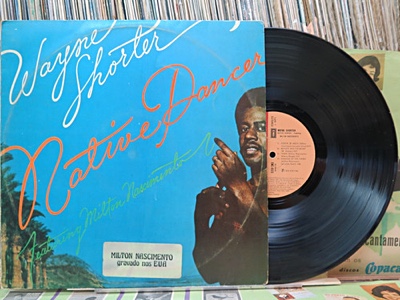 Wayne Shorter’s fifteenth album entitled Native Dancer is the album where he does a collaboration with Brazilian musician Milton Nascimento. It is a nine-tracked album with all of the tracks pressed on standard black vinyl records. Among these nine tracks are a number of Shorter’s most renowned singles, two of them being “Ponta de Areia” and “Miracle of the Fishes.” I’m sure you’ve heard of him, but if you're just starting to love the genre then it's best to listen to his works. This is a great album to have especially for those who love and prefer listening to musicians’ vocals. 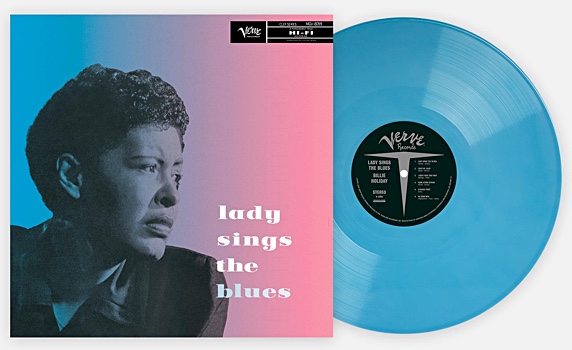 Legendary jazz vocalist, Billie Holiday, released one of her great and unparalleled jazz albums in 1956 and was reissued last year. The 12-inch vinyl pressing for Lady Sings the Blues was done by Vinyl Me, Please (VMP). The album has a jacket printed with the original album cover, a light blue vinyl record. It also has new liner notes included.

5. Ella Fitzgerald: Ella at the Shrine 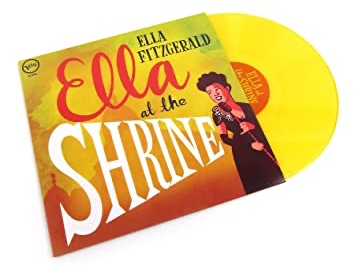 Ella at the Shrine is an album packed with tracks that were recorded live at the Shrine Auditorium in Los Angeles weeks after she signed with Verve Records. It’s a 12-inch vinyl pressing of eight tracks onto vibrant yellow-colored records. The records are then housed by single vinyl jackets that are printed with a cartoon-themed album cover. It features Ella Fitzgerald with a mic on her hands and the silhouette of a shrine. 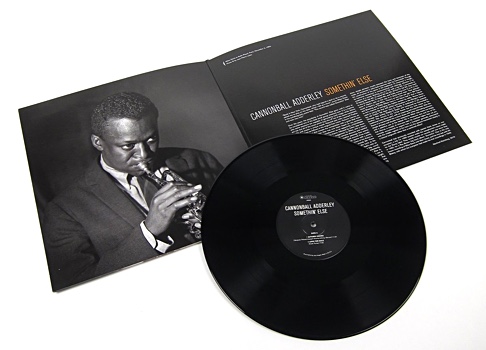 Cannonball Adderley’s Somethin’ Else is an album a jazz lover like you needs to listen to or have in their possession. It is a top-notch album from a top-notch ensemble led by world-renowned alto saxophonist, Julian Adderley. It features Miles Davis with his trumpet, Art Blakey with his drums, Hank Jones with his piano, and Sam Jones with his double bass. The album reissue is in an all-black theme with both the inner side of the gatefold jackets and the vinyl records in black. The front cover of the album is a new one featuring Jean-Pierre Leloir’s iconic photos. 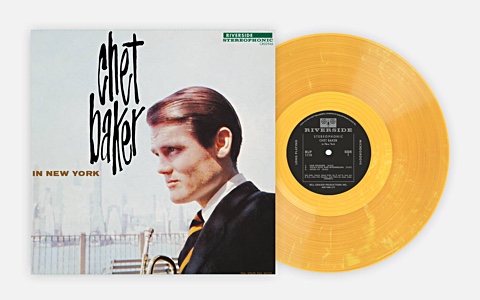 Chet Baker’s first album with the Big Apple which is based in Riverside Records is certainly a great album to listen to. It is a well-blended, well-mixed album that showcases his cool Californian tone and the instruments played by Al Haig, Johnny Griffin, Paul Chambers, and Philly Joe Jones with their piano, tenor saxophone, bass, and drums, respectively. Baker’s album that boasts its wide range of tracks, the serene song “Blue Thoughts” on one end and “Hotel 49” the intense one on the other, had a 12-inch vinyl pressing done by VMP. The vinyl album comes with a jacket printed with the original album cover and a gold with heavy white marble vinyl record. 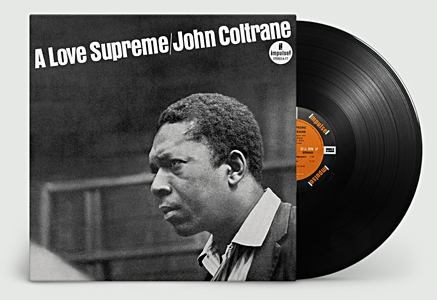 John Coltrane’s A Love Supreme is one that should never be missed on this list for it is a record that helped in the birth of a new kind of jazz. It was the first of its kind to have that hyper-spiritual focus many jazz music that followed have. I advise you to listen to this very carefully and not just as a background when you do something, it’s an album that will grip your heart from the beginning to the end. The soulful album would not be complete without the sombre feel of the album’s visual. To match the message and feelings sent and portrayed by Coltrane, the packaging is printed with a black and white photo of the musician and the record is in standard black. 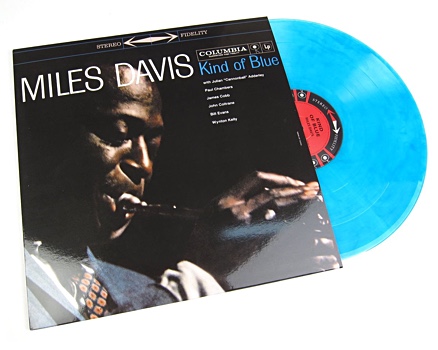 If you’ve been a long-time fan or listener of the genre I am pretty sure that you know the exceptional Miles Davis. I mean who wouldn’t when he is literally an unmatched legend of the Jazz genre. His status of being a legend was mainly because of his album Kind of Blue. Most people and critics agree that this album transcends the standard criteria for judging a supposed “best album” and many have argued that this was the most influential in the history of jazz. With this album, Davis went with a more relaxed style which led to the creation of an entirely new subgenre, modal jazz.

Now we’ve reached the end of the list. If you already have all ten of these albums and looking for more to collect or if you just want to have more choices to choose from then try scrolling through Vinyl Me, Please list of The 10 Best Avant-Garde Jazz Albums to Own on Vinyl.

Unified Manufacturing (UnifiedMFG) is a media replication company that's located in LA-right in the heart of the entertainment industry. Since 2005, we've been the favorite go-to place of many major and independent labels when it comes to CD replication, DVD replication, USB replication, vinyl pressing, t-shirt printing, and more. Whether you're about to launch a new album, a new film, a new book, or a new business, we're here to make everything that you could possibly need. Known for our friendly staff and efficient ways of doing things, we have a much higher rating compared to our competitors.