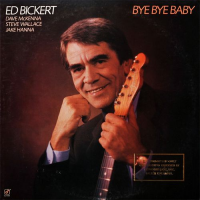 The problem has always been that Canadian jazz never really developed champions in the States. Unlike the others mentioned above, there's nothing exotic about a Canadian artist. No funny accents, little in the way of dramatic stories that capture the imagination and barely any foreign inflection in the music. In other words, they look and sound like us, so why bother?

In the process, many fans miss out on exceptional Canadian players. One of these is guitarist Ed Bickert. Retired now, Bickert grew up in Manitoba, the child of musical parents who earned their living by farming and orchard harvesting. His parents played dances in the 1940s, and it wasn't long before Bickert joined them. By the early 1950s, Bickert was playing jazz in Toronto. In the 1960s, Bickert was a studio musician and a member of Rob McConnell's Boss Brass.

Deeply influenced by guitarist Jim Hall, Bickert grew friendly with Jim, and in the 1970s, Bickert played often with bassist Don Thompson and drummer Tery Clark. He also played with Paul Desmond, when in Canada. Bickert can be found on several Paul Desmond albums, Including Pure Desmond on CTI (1974) and  Live: The Paul Desmond Quartet on A&M (1975).

Bickert recorded 18 albums as a leader, starting with the Ed Bickert Trio in 1975 and ending with Portraits in Jazz: A Tribute to Wes Montgomery in 1998.

JazzWax tracks: You'll find many of Ed Bickert's albums at Amazon and ITunes. Here's Come Rain or Come Shine in 1975...

Here's You'd Be So Nice to Come Home To, with Rick Wilkins on tenor sax...