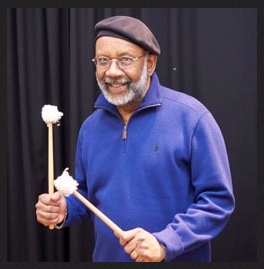 slideshow
Jazz Bridge in Old City Philadelphia! presents drummer Alan Nelson at Arch Street Friends Meeting House — 4th and Arch Street in Philadelphia — on Thursday, March 21st. Tickets are $10, $5 for students, and are available only at the door. Show time is 7:30. Information: 215-517-8337.

It’s for good reason that Alan Nelson is often referred to as a master drummer. As a child, he began as a tap dancer, progressed to African dance, graduated to hand drums, and thanks to another percussion great, Norman Connors, switched to the traps, falling under the spell of greats like Art Blakey, Philly Joe Jones, and a man Nelson considers his main influence, Max Roach. Since those auspicious beginnings, Nelson has played with just about everyone and just about everywhere. I probably know every pot hole and bump on the Jersey Turnpike, he’s fond of saying. His journey has included stints with John Coltrane, the Heath Brothers, Shirley Scott, James Moody, and Jimmy Garrison. In the mid-1970s, he became a part of the New York scene, playing with Hilton Ruiz, George Adams, and what was the beginning of a 12-year association with trumpeter Hannibal Marvin Peterson. As far as he’s come and gone musically and otherwise, he’s true to his Philadelphia roots and his Philadelphia sound. They call it a Philly Tip, he says of his sound and drumming style. It’s a certain kind of swing. A certain sound that Philadelphia players just seem to have.

Jazz Bridge is a Philadelphia-based non-profit organization dedicated to assisting area jazz and blues musicians in need. Their Jazz Bridge in Old City Philadelphia program is one in a series at this venue, along with four other area locales.