Sun rays streamed through mostly blue skies, pelting Fort Adams State Park with heat, as the annual jazz festival returned to the Rhode Island peninsula in 2010. Few people attending probably even realized that a week earlier, tropical storm Colin feigned a move that would have had festival goers singing a different tune. However, the storm altered its path and fizzled, leaving Newport with nothing but sunshine for its three-day musical extravaganza.

As things got underway, Darcy James Argue started off the late morning music on the Harbor stage. The 18 piece orchestra opened with "Transit," a zig-zagging odyssey inspired by the infamous Fung Wah bus service. Next, they performed "Zeno," a dizzying piece drawing from the paradoxes of the Greek philosopher bearing the same name.

"Think fear and destruction," Argue explained as he introduced "Phobos," titled for both the Greek god of Fear and the ill-fated moon of Mars. Throughout the performance, the orchestrator steered this modern day interpretation of a big band, through varied timing changes, moments of soft expressions, and places of crashing sound. While illness prevented Bob Brookmeyer from performing, Argue fondly recalled the influence of his mentor, performing "Blow-out Prevention," "Obsidian Flow," and closing with "Drift."

The 2010 festival experimented with its long-standing three stage layout. While the large, open-field Fort stage and the mid-sized, more intimate Harbor stage remained, the small Waterside stage was removed. This year, a Quad stage was added inside the walls of the stone fort. In the past, sounds from one stage could sometimes be heard at other listening areas, and this new layout helped improve the overall listening experience. 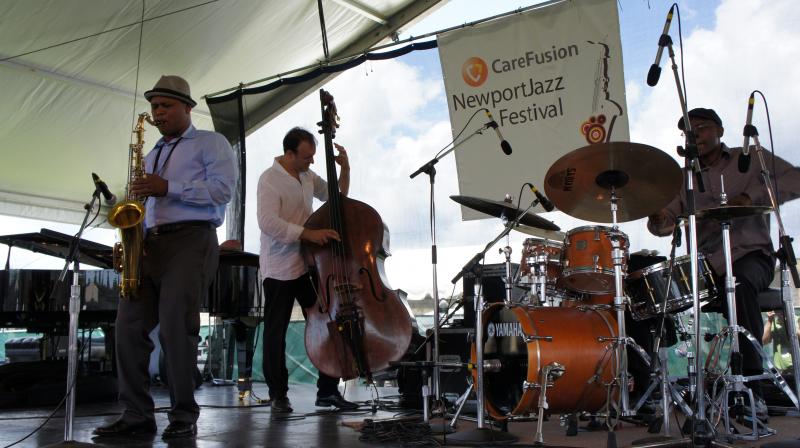 JD Allen took to the Quad stage at half passed noon. Joining the saxophonist, drummer Rudy Royston and bassist Gregg August completed a trio format, and threw down a marathon session that enthralled the audience. Beginning with the powerful "Esre!," the trio consistently improvised musical ideas throughout the set—a quick saxophone riff by Allen gave way to Royston's rolling drum work. Cymbals smashed and August's bass playing came to the foreground, the two exploring for several minutes. Allen returned, and rang out long, emotional notes, then the band plunged into the more Middle Eastern sounds of "The Cross and the Crescent Sickle."

Allen soared soulfully swerving around and through the rhythm. Suddenly, he played in abrupt bursts, and then brought the band back into more melodic movements. Incessant and fiery, the band performed with a relentless and enduring energy. Soon, they spanned themes for other pieces—"Sun House," "Pagan," and "Titus," among others. After nearly forty minutes, they broke into "Stardust," a slow moving ballad, where Royston worked his drums using mallets, while Allen's sax swooned, and August slowly walked notes. The tempo slowed and the band paused, as if ending, only to abruptly resume its energetic playing.

"I was initially a little nervous," Allen admitted after the set, "but I got comfortable. I enjoyed it. I think the guys enjoyed it, too. If you come to Newport, I realize it's an intelligent crowd. You can't bullshit this crowd. It almost feels kind of like when you're in Europe, they're listening intently." 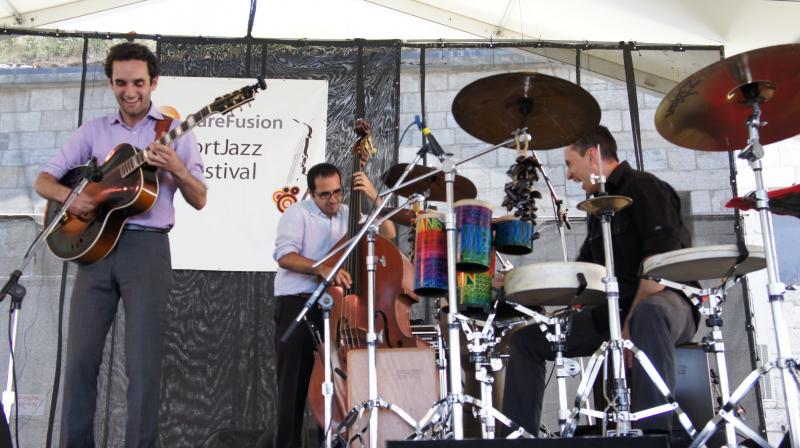 As the second round of performances came to a close, The Julian Lage Group displayed rich artistry and dynamic influences during the Harbor stage's mid-afternoon set. Joining guitarist Lage, were saxophonist Dan Blake, Cellist Aristides Rivas, bassist Jorge Roeder, and percussionist Tupac Mantilla, who formed as a cohesive unit while studying music in Boston. The set opened with "Listening Walk." As Lage repeatedly riffed on the opening number, Mantilla and Roeder rhythmically built a foundation upon which Blake's droning saxophone notes could be heard. Continuing, they played "Telegram," which touted a heavy Bluegrass feel, and briefly danced towards a Celtic sound.

The centerpiece from the performance may have been the creative trio twist on "Lil Darlin," where Guitarist Lage glided from melody line to solo flurries, and back, accompanied by Roeder's bass work. As Roeder played, Mantilla wove percussive beats by hitting the upright bass' body, bridge, and neck. Several pieces from the performance, including "Cocoon," "Working Title," and "Ode to Elvin," (which is dedicated to Elvin Jones), will be recorded later this summer, when the band returns to the studio for its second release.

"Newport, man, the vibe. The vibe of this place is unbelievable," explained percussionist Mantilla, who found the performance exhilarating. "All the water, and the people, this place has so much energy. The band was getting really excited just to play. We are so honored and happy to be here. It really is a blessing."

As Lage's performance surged on the mid-sized stage, pianist Ahmad Jamal began playing on the main stage, for the last of the mid-afternoon sets. Joined by New Orleans drummer Herlin Riley, bassist James Commack, and percussionist Manolo Badrena, the band opened with "Swahili Land." The set included a spirited rendition of "One," where Jamal worked his trademark playing, contrasting broken chords against richly layered runs, as the rhythm section brought some slippery sections to the up-tempo piece.

As Jamal's engagement ended, the sun's heat finally began to wane. While thirsty patrons filled the beer garden, Chick Corea's Freedom Band, prepared for a late afternoon set on the main stage. Joining Corea were saxophonist Kenny Garrett, bassist Christian McBride, and drummer Roy Haynes, who sported a shimmering, off-white coat, that was almost as reflective as the nearby sea. The group delivered a solid set and interesting improvisations on pieces such as "Bud Powell," "Psalm," "Monk's Dream," and "Steps," without getting scientifically esoteric or otherworldly. 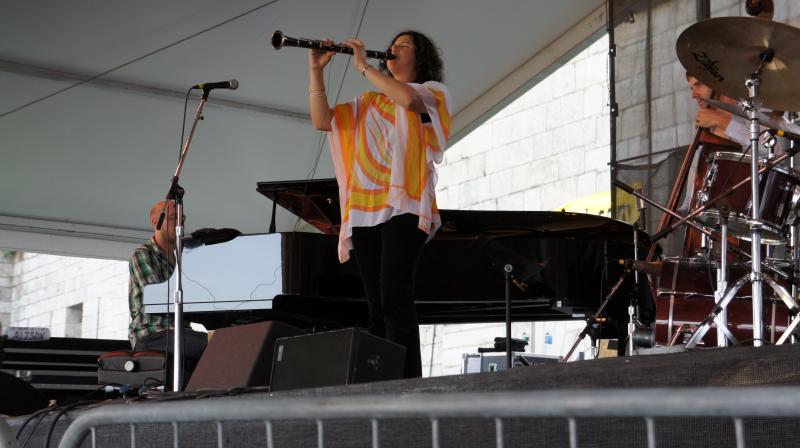 When late afternoon passed into early evening, clarinetist Anat Cohen delivered a dazzling performance to close out the Harbor stage. "How you guys doing?" she asked, which garnered an enthusiastic audience response as she played the intro for the loose, swinging, "J Blues." Cohen demonstrated her highly-fined chops, and deftly worked the tone holes on the licorice stick—bellowing shrewd notes, cutting deep chasms, and soaring to high peaks, while her band played along. Some five minutes in, Cohen dropped out, stepped aside, and danced feverishly while the rhythm section explored new ideas, each, in turn, taking a solo. Drawing from varied traditions, the adaptive band moved its way through "After You've Gone," the Brazilian ballad "As Rosas Nao Falam," the Cuban-influenced "Siboney," and ended on "Um a Zero." Working with bassist Joe Martin, drummer Obed Calvaire, and pianist Jason Lindner, Cohen delivered what might have been one of the most intimate and captivating sets of the day.