BY DAN BILAWSKY
April 19, 2012
Sign in to view read count
The idea of making the mold while breaking the mold may seem paradoxical, but it's appropriate when exploring education. The education sector has become obsessed with standardization—in regard to everything from pedagogy and methodology to content—but nobody seems to address the fact that much of the content itself wouldn't exist if not for original thinkers who refused to adhere to the norms and expectations that shackle others. The very idea of learning is to better yourself and go a step beyond, though this ideal often gets lost in the daily push and pull that surrounds education.

Saxophonist Lee Konitz and pianist Jean-Michel Pilc both know a thing or two about this topic. Both possess the technique to accomplish whatever their hearts desire, and the knowledge necessary to walk the straight and narrow, but their playing never seems to be hampered by the strictures of jazz that plague so many. Their unquenchable thirst for exploration has allowed them to move a mile beyond where most mortal musicians dwell, and both men constantly present music that marks them as original thinkers.

While some may think this wouldn't make Konitz and Pilc suitable to serve as educators, the opposite holds true. They are welcome precisely because they avoid the standard academic style of presentation, and never serve as musical pattern dispensers. Instead, on these DVDs, they simply share a bit of themselves, as they deal with the conscious and unconscious decisions that exist within the music making process. 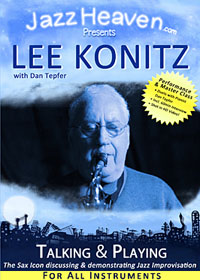 Lee Konitz simultaneously presents himself as one of the simplest and most complex of conceptualists. His plainspoken explanations are illuminating, as they bring clarity and focus to this art form, yet he never reveals much regarding musical technique. This dichotomy makes this DVD about broad concepts that cut to the core of creation, not theory or vocabulary. His frequent collaborator—pianist Dan Tepfer—joins him, serving as a foil for expression in verbal and musical terms. The music that's presented on this disc largely centers around the ideas of in-the-moment creation (a.k.a improvising) and making new music over the harmonic progressions of standards, but the conversation proves to be more stimulating than the performances.

Konitz and Tepfer discuss the idea of jazz as "an imperfect art," the immediacy of the music, the difference between conscious and unconscious hearing, the difficulty of conjuring the magic for a given performance and the gulf between an artist's perception of their own playing and an audience's reception of said playing. The idea of "staying fresh" and getting out of a "comfort zone" come up quite often and suggested solutions are discussed throughout. Hitting standards and songs in key signatures that aren't as comfortable for the player, mixing singing and playing, and changing up articulation habits are all referenced.

Konitz's storied career has been covered at length, on record and in print, but those who remain ill-informed about his music will receive an education during the lessons and in the hour-long interview. His upbringing, work with Claude Thornhill, touring with saxophonist Charlie Parker and connections to pianist Lennie Tristano, saxophonist Warne Marsh, trumpeter Miles Davis and many other important figures come into the picture during this fascinating look at music as a conversational art form. 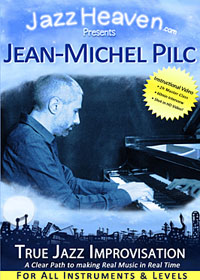 Hearing somebody with a pointed intellect espouse the virtues of avoiding intellectual construction may seem odd, but it makes perfect sense with Jean-Michel Pilc. He's smart enough to know that smarts aren't what makes music so special and he makes that clear throughout this DVD. Pilc's presentation takes flight with the idea that improvisation doesn't really exist, but is actually a form of real-time composing. He uses this topic as the foundation for the lesson, as he gets into the very building blocks of music making along the way.

Pilc's way with words is evident at every turn, and some of his statements truly resonate. He emphasizes the fact that "when you play with a rhythm section, you should sound like a rhythm section," and he views melody as "a succession of words" rather than a collection of intervals. He uses whatever he needs to make his point, be it a quote from classical pianist Arthur Schnabel, a nod to drummers like Jo Jones or Ari Hoenig, or a mention of a piece by Beethoven, and his advice is worth heeding. Orchestration, melodic development, singing, time, flow and clarity in presentation are all up for discussion. While piano is Pilc's weapon of choice, he makes it abundantly clear that everything is interconnected.

Pilc and Konitz are both one-of-a-kind players and personalities, but they have a similar understanding of jazz as a form of communication. Each of their discs is a self-contained treasure trove of musical thought, and those who explore both may notice how well they complement one another.