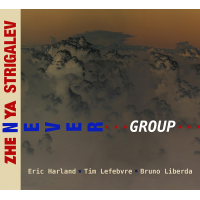 Alto saxophonist Zhenya Strigalev's trio Never Group with drummer Eric Harland and bassist Tim Lefebvre bring its definition of punk jazz with in-ear-your-ear performances with a nonchalant attitude. Recorded over two days in Berlin with a few guests dropping in on the fun, the recording is compelling in its inventive energy.

This follow-up to Strigalev's 2015 sextet release Robin Goodie(Whirlwind) finds his tendencies shifting from more traditional jazz to freer and a range of influences. Within the hour plus 20 tracks are bits of humor ("I Messed up at the End of My Solo"), Reggae-ish bounce grooves ("Some Thomas"), hypno-grunge rock ("Strange Party") and number of experimental codas.

Like a DJ mix tape it would be easy to dismiss the variety as some post-modern hipster playlist but what comes through with clear resolve is the trio's skill and jam session vibe. Strigalev's arid horn is bright and effortless revealed in Charlie Parker-like flights and empathetic playing. Harland's stature as one of jazz's leading drummer is well known and he's in his element whether popping a nasty back beat in "Little Struggle (coda 3)" or caressing the cymbals in "Second Hand" as Strigalev alto blows tenderly while Lefebvre, who is no stranger to progressive-thinking music, provides command lines on electric bass.

Showstoppers include the intense jam called "Bio Active" fueled by Harland's obliterating traps, Lefebvre's funky riff and Strigalev's passionate playing. Weird noises emanate from "Bassgeingengeister" provided by Austrian electronics musician Bruno Liberda and other guest appearances make this a wildly different experience from Strigalev's unique perspective, an artist who knows jazz's lineage but is unafraid to create his own path.