Rob Garcia: Finding Love in an Oligarchy on a Dying Planet 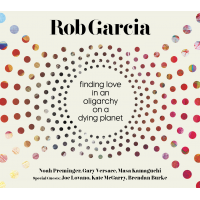 A complex amalgam, drummer-composer Rob Garcia's Finding Love in an Oligarchy on a Dying Planetis as densely constructed and provoking as its title. Despite the socially conscious themes that its track titles, lyrics, and multi-layered musical journeys explore, Garcia has made clear this is not a protest album. At least not in the typical sense.

It is not advocacy. It does not call for denial, dissent, or even dismissal of the social ills the album's thirteen pieces directly reference. It avows neither acceptance nor rebellion. It presents the violence, political discord, environmental disaster, racial discrimination, and economic disparity of our times as realities neither avoidable nor alterable, only something to be absorbed and navigated in an attempt to find within the tumult some resting place of solace.

Form following function, the thirteen pieces are not grounded in the upheaval of style, deconstruction of genre, or the jagged dissonances often associated with protest music. Instead, Garcia's compositions and lithe, solid rhythms reflect the core traditions of jazz, presenting musical terrain for the quartet—and guests—to navigate and explore, establishing a constant sense of tension and seeking. These are individuals attempting to chart a course through the unalterable realities that define their existence, grasping for connection, and holding on to those moments of self-constructed relationships and meaning, with eyes wide open at what is happening around them.

It is also an album of significant depth and breadth, executed with aplomb. Tracks range from the lyrical rendition of Stephen Foster's classic "Beautiful Dreamer," on which Noah Preminger delivers melodic, gentle solos, to the jagged, up tempo "Terror, Fear, and Media," which serves as a platform for Preminger's and Gary Versace's deft solos, to the subtle lament "Guns Make Killing Easy," built on a brooding bass line by Masa Kamaguchi, adorned by his colleagues overlapping, discomfiting lines. The variety continues with the stand-out "Greenland is Turning Green," on which Joe Lovano melds his distinctive tone with Preminger's, while Garcia lays down a restive rhythm on the traps, exhibiting particularly sharp hi-hat work. Two pieces featuring vocalist Kate McGarry and the appropriately coarse grained, old-school spoken word gambol by actor, musician, and activist Brendan Burke titled "Mac and Cheese" add yet more textural layers, with the stellar title track acting as both thematic and musical centerpiece.

The end effect of this constellation is one of mature musical skills applied to an unapologetic dissection of our age's existential dilemma.