BY NENAD GEORGIEVSKI
March 23, 2016
Sign in to view read count 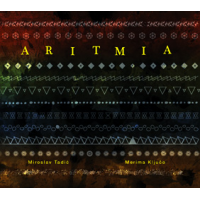 The intimacy of a duo setting has had a special appeal for guitar virtuoso Miroslav Tadic. During his illustrious career, he has released several adventurous duet albums with luminaries including guitarists Vlatko Stefanovski, Dusan Bogdanovic, saxophonist Peter Epstein and the vocalists Teofilovic brothers. The album Aritmia is a gorgeous pairing with Bosnian accordionist Merima Kljuco that continues that proclivity. The pairing of an accordion and a guitar is a tough call but these two operate with an unusual charismatic delicacy and subtle force.

Tadic's spare, translucent guitar and Kljuco's subtle accordion complement each other exceptionally well, and their tight interactivity and melodicism often reminds of collaborations with much longer duration. The instruments mostly take different functions but Kljuco's accordion mostly functions as a discreet foil and the intimate conversations they are having swell from interesting to enthralling as they slowly unfold. Tadic's records characteristically mix classical and traditional folk music covering a wide range of traditions and geographies. The seamless, flowing selection contains classical and folk musics from the Balkan's region. The album starts with "Three Romanian Folk Dances" by classical composer Bela Bartok and Erik Satie's "Gnossiene 1" which was initially inspired by traditional Romanian music. Kljuco keeps the volume down and her accordion is more subdued as it gently takes shape in the background while Tadic's guitar interweaves between the melodies. These compositions are more like quiet conversations than contests. They both bring something more than sheer virtuosity. They are imbued with the freedom and flow of improvised music and the spontaneity of jazz including subtlety that is characteristic for chamber music.

The pace changes with "Ihtimanska kopanica," a Bulgarian reel. It's a short but an upbeat tune with its characteristically playful swirling melodies. "Kraj Potoka, bistre vode" is a gently melodic piece that is stated with sweet simplicity. It has a slight mournful feel with a questing melodic exploration. Tadic's playing adds a distinct edge to Kljuco's soft sounds.

"Pajdusko Oro" is a popular wedding dance in Macedonia and Tadic has already recorded this track on the duet album with Epstein Without Words (MA Recordings, 1992). This dance is usually played on an accordion and this duet's version features a wonderful interplay where the instruments chase each other. The duo also performs a lovely take on "Kales Bre Angjo" where the two play with such serene authority that the listener is almost afraid to take a breath until the 3-minute track is over. On all of the tracks the guitar and the accordion are so wonderfully blended that sometimes it is not really that obvious where one instrument begins and the other leaves. On Aritmia, Tadic and Kljuco make a quiet world full of rich sonorities. It is an evocative venture between skilled musicians and the result is this quietly compelling and deeply felt music.