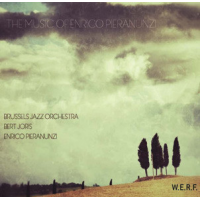 For those few die-hards who may adamantly insist that superior big-band jazz never reaches beyond America's borders, here is irrefutable proof that the reverse is true: the Brussels Jazz Orchestra, world-class in every respect, performing (in concert) admirable compositions by the marvelous Italian pianist Enrico Pieranunzi with arrangements by the no less marvelous trumpeter Bert Joris who also solos on most of the album's eight tracks. If the future of big-band jazz looks and sounds like this, the bandwagon had better be large enough to accommodate at least one more enamored listener, namely this one.

Pieranunzi, a two-time recipient of France's Djangodor Award as Europe's outstanding jazz musician, is a convert from classical music whose early training in that genre continues to inform his approach to jazz composition and improvisation. To put it another way, Pieranunzi's compositions, while unreservedly steeped in jazz tradition, maintain an aesthetic veneer that isn't far removed from the stately precincts of a recital hall or opera house. It's a trait that is clear throughout but is especially well-defined on more temperate numbers such as "Within the House of Night," "Fellini's Waltz," "With My Heart in a Song" or the seductive ballad "Distance from Departure."

Even so, Pieranunzi can (and does) swing when necessary, a tendency best exemplified by "Persona," "Coralie" and especially "Newsbreak," the album's most impetuous and exuberant number. Here, as elsewhere, Pieranunzi proves that he is a sharp and resourceful soloist who is never at a loss for a suitable pattern or phrase. While the other soloists aren't named, baritone Bo Van Der Werf and bassist Jos Machtel are definitely front and center on the emphatic finale, "It Speaks for Itself." Joris, meanwhile, has no extended solos but uses his horn essentially to adorn and enhance his otherwise impressive charts.

Although it bears no "made in the U.S.A." label, this is stylish and enterprising jazz by any measure, created and performed by a pianist, trumpeter and orchestra at the top of their game.

Persona; Within the House of Night; Fellini’s Waltz; Newsbreak; With My Heart in a Song; Coralie; Distance from Departure; It Speaks for Itself.