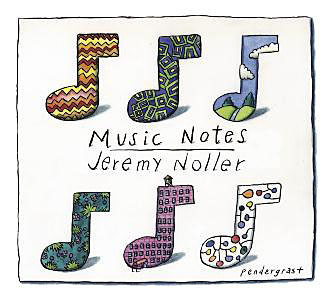 What do Illinois and West Africa have in common? More than is apparent, at first glance. Originally from Libertyville, Illinois, drummer Jeremy Noller has studied with the great saxophonist Bunky Green, traveled and performed abroad, and gigged in New York since 2003. An educator whose influences include Wayne Shorter, Noller is also a student of the traditional drumming music of Guinea, West Africa. These experiences inform Music Notes , a worthwhile excursion into music with ebullient rhythms and heartwarming melodies.

The nine pieces interweave folkloric melodies and popular music with the fragrance of performers such Angelique Kidjo and jazz guitarist Lionel Loueke. What makes Noller's debut equally impressive are not just his percussion skills, but his knowledge of the music and the spirit that's articulated by his talented band: the idiomatic expression of the acoustic guitar, performed superbly by Jesse Lewis; the saxophone's phrasing, never overplayed, by Brian VanArsdale; and the underpinning jazz rhythms by Noller and The Wee Trio bassist Dan Loomis, which form the foundation. Add enticing percussion and danceable melodies, and this is music that quickens the senses.

Lewis' incisive plucks and chords usher in "We Go," which includes a percussion jam—with Noller, Sam Bathric on shekere, and Mangue Sylla on djembe—that is later stated more intensely in "Percussion Interlude." VanArsdale's tenor has a deceptive muffled quality that livens with soulful fire in "On The Is" and "Dawe," while Loomis offers a deep solo in "Soliba." In each case, the musicians communicate the beauty of West Africa.

A blues stands proud in "Don't be Scurred," where VanArsdale's parched horn speaks of Thelonious Monk's longtime saxophonist Charlie Rouse, and jazz swings true in Noller's remake of the title track to Wayne Shorter's Speak No Evil (Blue Note, 1967). The band cooks it; a fine way to conclude the set with its "straight, no chaser" kind of swagger. But it's no surprise because Noller is a true jazz man—whether by way of Libertyville, the music of West Africa, or the spirit of 52nd street.