Performer, educator, composer, arranger, lecturer, and music education consultant, Professor Green has 14 albums released in his name on vintage labels such as Chess, Exodus, Cadet, and Vanguard. As an international performer, educator, and lecturer, his European tours have taken him to Poland, Italy, Sicily, Sardinia, Germany, Holland, Switzerland, and Africa. Professor Green received film credit for his background solo work in Lorraine Hansberry's A Raisin in the Sun, featuring Danny Glover and Esther Rolle. He is Past President and permanent chair of the Past Presidents Council of the world's largest jazz education organization, the International Association of Jazz Educators (IAJE). Professor Green received a rare five star rating from Downbeat Magazine for his album Healing the Pain

A tetrahedron is a pyramid with a triangle base, thus a three dimensional shape consisting of four triangle faces. On the cover of his newest undertaking as a leader, Canadian drummer Ernesto Cervini uses this shape as an analogy to his working trio inviting a fourth member to the party. In this case the fourth person ...

This week we open with the music of veteran jazz pianist Cyrus Chestnut and a cut off his latest CD Kaleidoscope. We explore the jazz goods of Bunky Green and the great Reginald Chapman. In honor of the holiday season of 2018, we include several festive tunes to keep everything real and moving in the right ...

Artists don't release Live at the Village Vanguard recordings unless they've truly got something to say. The list of recordings from that fabled venue, run for decades by the incomparable Max and Lorraine Gordon, is indeed long and legendary, with well over 100 titles to date, including some of the most iconic recordings in jazz history. ... 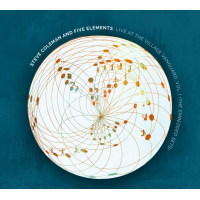