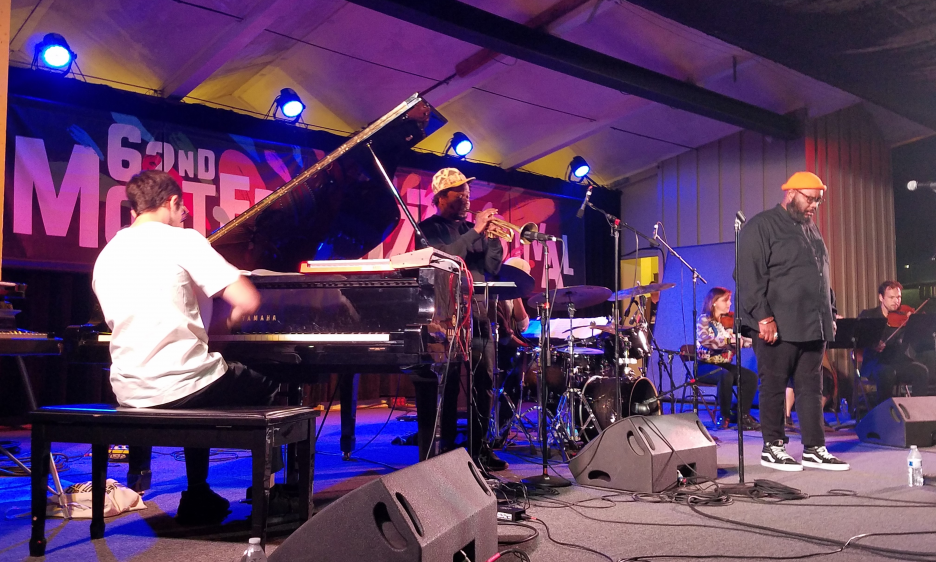 It sometimes happens at the historic Monterey Jazz festival that the "main" and most memorable takeaways of a program occur away from the main arena stage. And so it went at the 62nd annual festival in September—at least to these ears, belonging to a Monterey festival veteran.

While the arena roster banked on the high profile and varying artistic merits of Diana Krall, Chris Botti Christian McBride, and party-stoking groove machinery of Snarky Puppy, more deeply satisfying and venturesome jazz wares carried the day on the smaller "grounds" stages of the Monterey County Fairgrounds. Most notably, the cerebral stars of the weekend appeared, as if by design, at the beginning and ending/alpha and omega positions in the program: tenor saxophonist Chris Potter's stunning new Circuits trio served as a bracing first act in Dizzy's Den, and, closing out the festival on the outdoor Garden Stage, we got the evocative provocations of trumpeter Ambrose Akinmusire's ambitious Origami Harvest.

These two relatively new projects are disparate in sound and vision, yet share a common ground, as fresh creative expressions and ensemble concepts led by virtuoso leaders in the upper echelon of their respective instruments. Potter's new team-up proposition, with drummer dynamo Eric Harland and new sensation keyboardist James Francies (also artfully handling "bass" duties with his left hand), follows up on the sophisticated groove mandate of Potter's Underground band, another scene-stealing act at an earlier Monterey festival.

For his part, Akinmusire has had critical affiliations with the Monterey Festival going back to his formative high school years coming out of the famed Berkeley High School Jazz program, and notable sets as a leader and as part of the Monterey festival on tour band in 2013. His evolutionary thinking about possibilities in and around a jazz foundation continues apace with Origami Harvest, in which he has found compatible strategies for blending play jazz foundation with rap—Kool A.D.—and the leader's intriguing ideas about writing for string quartet, being the risk-accepting Mivos Quartet. Empathetic allies from Akiknmusire's various groups—the versatile pianist Sam Harris and strikingly powerful yet sensitive drummer Justin Brown—provided foundational but also coloristic functions in the mix, while the leader literally situated himself on the ensemble back line, and himself humbly restrained from excessive spotlight time. When he did cut loose, though, we caught feverish hints of what makes this trumpeter one of the most captivating on the scene.

Artistic matters and priorities were less apparent on the weekend's arena playlist. Botti, with a Sunday night set highly reminiscent of his last show here, demonstrated that his song and stick remain the same. He is a well-dressed trumpeter whose chops far outweigh his aesthetics, but who has carved out a popular shtick for luring fans not necessarily into jazz for its own sake. Among other personal traits, he has a bizarre attraction to excess reverb, creating a blurry gloss over his tone. Also bizarre, in Monterey, was the overplaying and showboating solos on tunes traditionally characterized as sensitive ballads—"Blue in Green" and "You Don't Know What Love Is," heard here in a jittery version in sharp contrast with Chet Baker's melancholic cool. Botti and co. played as if they didn't, in fact, know what love was.

By contrast, Krall has managed to command an epic audience share—by jazz standards—while usually keeping artistic integrity intact. Her Monterey turn was in especially impressive, in terms of tasteful understatement rather than any kind of grandstanding. Beautifully abetted by guest Joe Lovano steering his tenor sax through the gentler side of his playing, Krall displayed a depth of feeling and swinging grace in her piano work, as well as a winsome balladic poise, vocally.

2019's Monterey model also followed suit with the festival traditions of tribute projects—often in homage to artists who have graced the festival in the past— and the treasured custom of commissioning new works. On both of those fronts, Saturday night's appearance by McBride's crackling fine (if conservative) big band featured a newly commissioned, 16-minute tribute to the late Roy Hargrove, whose diverse musical interests and projects were reflected in McBride's eclectic score. In the opening arena slot, artists-in-residence Derrick Hodge and Allison Miller (bassist and drummer, respectively) joined forces to create a program in tribute to the late great Mary Lou Williams, whose Black Christ of the Andes (dedicated to to St. Martin de Porres) was premiered on that stage in 1965. History and heritage keep looping around in various ways at this festival.

Miller expressed more personal loan artistic statements on the side stages, from a duo with violinist Jenny Scheinman to her sparkling an aptly-named group Boom Tick Boom. Elsewhere in the side stage schedule, one could hop between Amina Claudia Myers' soulful Hammond B3 testifying in the Nightclub space over to Antonio Sanchez Migration project in Dizzy's Den. Leaning on material from the immigration-themed new album Lines in the Sand, Sanchez's band showed signs of awkward expressive mobility and refinement, with a post-fusion, post-Metheny Group sound, made especially distinctive through the tight, luminous wordless vocal lines of the impressive Thana Alexa.

In the final analysis, this year's finest hours in terms of "traditional" jazz came from the eminent piano virtuoso Kenny Barron (whose greatness was cited by Krall during her set, more than once). Barron, whose empathetic connection with fellow veteran legend, bassist Dave Holland, in recent years has brought out deeper work from the pianist, appeared both in trio (with drummer Nasheet Waits) on the arena stage, and in an intimate duo with Holland in Dizzy's Den. The latter set that resonated more deeply, with a poetic grandeur and sense of dialogue belying the intimacy of the context. Longtime festival supporter and participant Clint Eastwood sat in the front row, ringside, and seemed to hang on every note and phrase, as did the rest of us.

For the record, the literal last-gasp backroom finale of the festival occurred at the nightclub late on Sunday night, where the annual "B3 Blowout" tipped its hat to seasoned organist Mike LeDonne's Groover Quartet. Joined by the starry likes of guitarist Peter Bernstein, drummer Joe Farnsworth, and saxophonist Eric Alexander—in suits for the occasion—LeDonne gave Monterey a New York slice of B3 band jazz, as heard on the other coast every Tuesday night at the club Smoke in NYC.

Here was yet another jazz subculture element woven into the ever-varied tapestry converging on this enlightened California Bay City each September. Longtime festival director Tim Jackson has created an important festival entity, which manages to capture an overview of a music which is less a specific or demographically-limited idiom, but a diversified musical world, ever in motion. Monterey continues to be a go-to press report zone on the state of jazz.