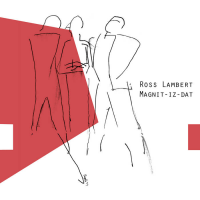 In the mid-1980s, guitarist Ross Lambert was first exposed to and immediately became committed to improvisatory music, in Sheffield via Derek Bailey. Since then he has been involved in, initiated and been a connector between a very wide variety of improv. In November 1999 he was one of the earliest participants in the weekly Friday-evening improv workshops convened by AMM drummer Eddie Prevost, and has been an active workshop member ever since. Despite having worked with an impressive range of musicians around the world, Lambert's discography is comparatively small, leaning towards releases on Prevost's Matchless label and recordings with other workshop participants, notably saxophonist Seymour Wright. Magnit-Iz-Dat is Lambert's first solo recording, fittingly being issued on Earshots, the label set up and run by current workshop stalwarts Edward Lucas and Daniel Kordik. Recorded by Lucas and Kordik, on the afternoon of Saturday 24th March 2018, the album features seven tracks—running time nearly fifty-seven minutes—recorded in the Cafe Oto Project Space and, at various South London locations, in the back seat of an old Volvo estate car. (The YouTube clip below has footage filmed on the day.) At the locations in South London, in addition to playing guitar, Lambert talks about the local area, both from his own personal experience and his knowledge of local history, sounding at times like a good tour guide. In some ways, these spoken passages are reminiscent of Bailey's own "chats," the main difference being that Bailey integrated his chatting with his guitar playing whereas Lambert keeps the two separate. However, fascinating as they are, these talks are not allowed to dominate the music here, totalling less than five minutes altogether. As always, Lambert employs a range of objects and techniques to complement and accompany his guitar playing, including vibrating the strings with a tuning fork, exciting the guitar body with a moistened finger, humming along melodiously while playing, and giving the guitar a prolonged, noisy kiss. Aside from such embellishments, Lambert's guitar playing has a kaleidoscopic quality that manages to integrate a range of music and influences into a coherent whole, including occasional snatches of folk, blues and flamenco. To quote Eddie Prevost's sleeve note for the album, "One hears shades of Derek Bailey and 'good 'ol boy' country music gone haywire. He picks and pulls at the memory of Anton Webern and scrapes away at the cast-iron scabby wounds of the avant-garde." Most of all, though, Lambert is uncompromisingly himself, not looking to copy or borrow from anyone. His music is his own, reflecting years of playing with and listening to others, alongside his own unique experiences and explorations. Bailey would be proud of him...

Floating Blossoms; Nightclub Wife; The Melody That Moves Me; Lure of a Lowbrow Engineer; Sometime Receptionist; Hamish Imlach; Easily Influenced with a Sense of Doubt.