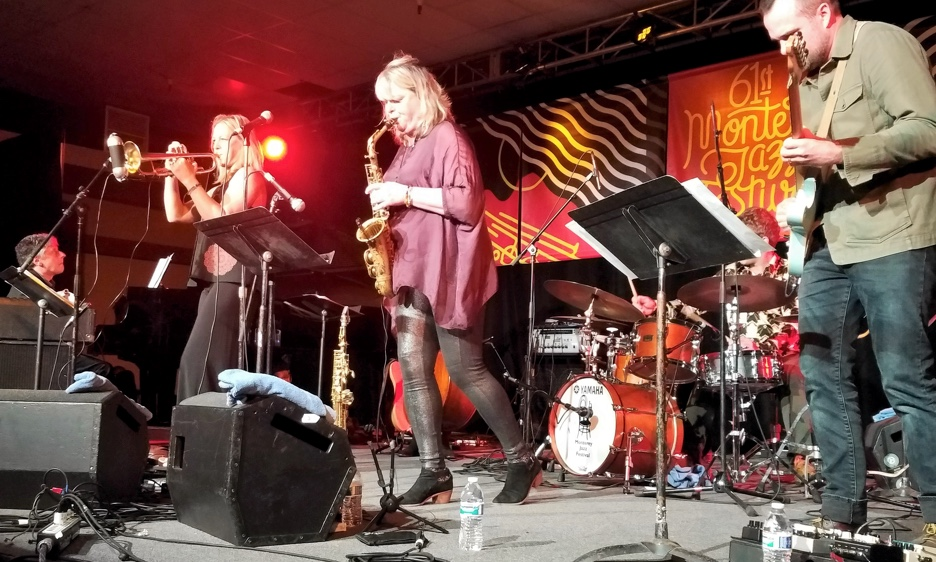 The opening act in the main arena venue of the (Monterey County) Fairgrounds provided a bold stage-setting moment for one of this festival's all-too timely themes in 2018, 'the year of the woman.'

It made perfect sense when the Monterey Jazz Festival toasted it's milestone 60th anniversary last year with a bevy of tribute shows, a scheme which managed to accommodate in a bevvy of significant living players, while paying respects to the historic legacy of iconic artists who have passed through this venerable festival (the oldest continuous jazz fest in the known world), including tribute subjects Ella Fitzgerald, Dizzy Gillespie, Sonny Rollins and Celia Cruz.

The recent festival number 61, a rewarding three-day spread over multiple stages at the Monterey County Fairgrounds, as usual, went a bit lighter on the tribute concept. An homage to the late Michael Brecker (with Donny McCaslin shining in the tenor saxophone role), hit the main Arena Stage on closing night, and Christian McBride led a Ray Brown tribute, the highlight of which was a three-bass virtuoso summit meeting, with John Clayton and John Patitucci.

But more importantly and topically, the main arena's opening night ceremonies boasted a worthy tribute to the late great pianist Geri Allen, courtesy of a mostly female powered group led by saxophonist Tia Fuller and trumpeter Ingrid Jensen—the festival's artists-in-residence, with Terri Lyne Carrington powering the aggregate on drums. This opening act in the main arena venue of the Fairgrounds provided a bold stage-setting moment for one of this festival's all-too timely themes in 2018, "the year of the woman."

Both Fuller and Jensen went on to lead their own respective projects on smaller stages over the weekend, and this was a rare year when festival favorite Dianne Reeves felt less like a part of the heralded womanly contingent than an old guard artist, rooted in the long-acceptable tradition of female vocalist in jazz, versus women instrumentalists. (It must be noted that Reeves's poignant version of Wayne Shorter's "Infant Eyes" was a high point of the weekend).

In other news related to jazz women (or jazz artists who happen to be women) it was inspiring to see pioneering soprano saxophonist is Jane Ira Bloom leading her band—with pianist narrator Dawn Clement in the mix—and accentuating material from her new Emily Dickinson-inspired project. On Sunday, ace clarinetist and innately versatile musical force Anat Cohen took to the main stage to guide her tentet, a multi-colored, multi-genre enchantment to behold.

Young singer Veronica Swift asserted her artistry in the a very packed Dizzy's Den, fulfilling suggestions of her unfolding promise, in the densely-populated field of young jazz singers. Speaking of singers, one of the living masters on the jazz vocalist scene, Cecile McLorin Salvant, dazzled in her spotlighted moments as part of this year's Monterey Jazz Festival on Tour band—which, incidentally, features two notable women horn players up front, in the form of Shorter-esque saxophonist Melissa Aldana and trumpeter Bria Skonberg.

From the "pop that matters" contingent, Norah Jones made her Monterey debut by closing out the festival with her increasingly deep way with a song, heard in a lean quartet setting with great drummer Brian Blade (although he didn't get much chance to flex his artistry in this pop-inclined context). On Sunday afternoon, Lucinda Williams, the rightfully revered singer-songwriter, also made her Monterey debut, as the leathery chanteuse of choice in Charles Lloyd's new pop-soul-jazz act, the Marvels. Lloyd is a code-switcher at the moment, delving into looser, serious jazz moves in his quartet and embracing the groove and winning over new pop-inclined fans with his band the Marvels (playfully pronounced by Williams as the "MarVELS").

And from the from the more avant-colored niche of the Jazz universe—which festival director Tim Jackson has insisted on at least broaching during his long tenure here—envelope-pushing guitarist of the moment Mary Halvorson appeared with her venturesome trio Thumbscrew. Another important project from the left end of the spectrum came in the form of Wadada Leo Smith's large-scale and big-thinking "America's National Projects" project (with a necessarily flexible and mutable ensemble of pianist Anthony Davis, drummer Pheeroan bassist John Lindberg and cellist Ashley Walters). In his distinctive voice, Smith offers up a musical paean to the sanctity and fragility of the National Parks, specifically, and the environment, generally.

In terms of other potential thematic trends this year, 2018 also marked a year also resplendent in glorious guitar trios—led by a trio of contemporary jazz' most significant players, Bill Frisell, Julian Lage and Adam Rogers. Frisell is, of course, the established and influential veteran of the three, whose painterly approach to a once more brash and hubristic instrument, has had a profound effect on modern jazz guitar.

Frisell is on a roll at the moment. His recent solo project Music IS ranks as one of this year's great jazz albums, he has gained some new attention as part of Lloyd's crowd-pleasing Marvels band, and Frisell's stunning trio—with new kindred soulful ally, bassist Thomas Morgan, and longtime comrade Rudy Royston on drums—wove some of the truest Monterey magic this year. Covers such as "Lush Life" and an anthemic take on "What the World Needs Now (is Love)," mixed in seamlessly with originals such as his early jewel "Rambler" and others from a few decades of Frisell-ish musical thinking. Somehow, Frisell feels right at home in Monterey, where his list of past visits included a memorable duet with drummer Paul Motian and a luminous festival-commissioned suite-like piece documented by his album Big Sur.

Lage's musical lens continues to widen before our ears, moving from mainstream clean-burning powers early on to a current roster of context including John Zorn's world and a wonderful two-guitar band with Nels Cline and drummer Tom Rainey. In this trio show in Monterey, with the young drummer Eric Doob and bassist Jorge Roeder in tight, empathetic accord, Lage charged up the packed and gaga audience in the Pacific Jazz Café with friendly neighborhood virtuosity and musicality, a chemistry more good-spirited in nature than about empty showboating.

Of this list, the limber, intelligent and genre-bounding Rogers is the guitarist mostly deserving of greater recognition, and he was thankfully granted a generous stage time—on different stages around the Fairgrounds. His own powerful, progressive and sometimes Hendrix-ian trio, with bassist Fima Ephron and powerhouse drummer Nate Smith, literally opened the festival with an early Friday evening set, climaxed by the rhythmically spidery, neo-fusion jolt of "Dice," the title track of his excellent recent trio album. Rogers—one of the treasures of this edition of the Monterey festival—later spiced up Tia Fuller's Diamond Cut and the Brecker tribute, on the arena stage.

Monterey's busy programming grid, running from early Friday evening through Sunday before midnight, can be an embarrassment of riches—and was, this year. Naturally, the riches can also make for scheduling conflicts for even the more diehard and dogged of festival-goers, eager to catch as much music as possible.

For instance, I had to miss my rare chance to hear Thumbscrew out here on the west coast because of the timing of the important new work by Wynton Marsalis and his Jazz at Lincoln Center Orchestra. Spaces is a modular new suite from Marsalis, a musical ode to animals (and archetypal impressions thereof) with a strong emphasis on a dance component—by Charles "Lil Buck" Riley and Jared Grimes—and an even more unabashedly Ellington-ian musical frame of compositional mind than before in Marsalis Duke-centric oeuvre. One of the work's most notable virtues is the balancing act it achieves between musical sophistication and an accessible, humor-and movement-fueled concoction which could conceivable appeal to both jazz heads and those disinclined to like jazz, or what they think jazz is. Not incidentally, the Monterey Jazz Festival is a ripe and righteous locale for Marsalis' widely-held personal and institutional values. Spaces represents Marsalis' philosophy of presenting jazz of utmost integrity and seriousness, which can also reach out to the "other side" of musical culture, and expand public awareness of this profound, swinging and ever-changing American-born music. And those values were well entrenched in Monterey, once again, with a welcome new burst of gender equilibrium attached.