By Dave Wayne
September 9, 2015
Sign in to view read count 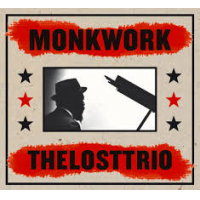 In the academic world, it's not unusual for someone to devote their scholarly energies to the study of a single, galvanizing individual and their life's work. Take Abraham Lincoln, for instance: the number of college professors and independent historians who've devoted their lives to thinking, speaking, and writing about Honest Abe is simply astounding. A similar phenomenon crops up in music, as well, and increasingly so in jazz; where just enough time has passed to reveal the true and lasting significance of particular composers and instrumentalists. One obvious and truly rewarding choice for thorough and repeated repertory study is the music of Thelonious Monk.

Collectively and individually, the members of the Bay Area-based ensemble The Lost Trio would easily qualify as Thelonious Monk Scholars at any university. The evidence, so to speak, is on their latest album Monkwork, which is as quirky and as charming as its subject on many levels. First, there's the sheer irony of a Monk tribute album by a piano-less trio. Second, Monkwork consists of a series of medleys that reveal as much about Monk the composer as they do the players themselves. The flow of one tune into the next is, in some cases almost imperceptible, and yet the linking moments between each piece contain some of the album's most vital music. Particularly enjoyable is the manner in which tenor saxophonist Phillip Greenlief's unaccompanied solo zeroes in on the tonal and harmonic similarities of "Pannonica" and "Jackie-ing" while finding more than enough improvisational elbow room to make a definitive personal statement. On the other hand, the segue from the Latin-tinged "Think of One" and the quietly majestic "Ugly Beauty" is Dan Seamans' stark, unexpected, almost hair-raising, unaccompanied arco bass solo. Quite the attention-getter, that. It's also worth noting that many of the pieces here are among the least frequently covered of Monk's oeuvre. The trio's jolly version of "Work" is particularly worthy in this regard.

Third, these guys are clearly having fun, and the music on Monkwork is so loose and relaxed that it's not difficult to imagine that some, if not all, of these arrangements occurred spontaneously. And that's another reason why Monkwork works so well. Greenlief, whose credits include recordings, tours and performances with Fred Frith, Meredith Monk and They Might Be Giants, is a versatile and resourceful soloist with a lovely, burnished tone. Though best known for his work as a free improvisor, he seems quite happy to work in an "inside" post-bop bag. Seamens, also a member of the New Klezmer Trio with Ben Goldberg and Kenny Wolleson, is a little-known Bay Area virtuoso who effortlessly dances back and forth between the front line and the rhythm section. Tom Hassett is a classic, hard- swinging bop-style drummer whose understated, easygoing playing really lets the music breathe. The ease with which these guys dig into Monk's music in a profound and personal way is admirable and easily palpable.

About The Lost Trio