By Troy Collins
September 9, 2015
Sign in to view read count 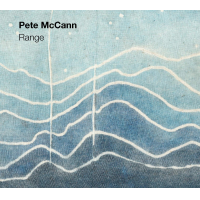 Wisconsin-born guitarist Pete McCann has been a mainstay in the New York City jazz scene for over 25 years, yet mysteriously continues to elude widespread recognition, despite his impressive virtuosity. McCann's enviably diverse skills are well-documented on the aptly titled Range, the fifth release issued under his name. Joined by alto saxophonist John O'Gallagher, keyboardist Henry Hey, bassist Matt Clohesy and drummer Mark Ferber, McCann and company embark on an eclectic excursion exploring myriad genres, from straight-ahead and post-bop to avant-garde and jazz-rock fusion.

The session opens with "Kenny," a lilting, lyrical ode to the late trumpeter Kenny Wheeler, who McCann worked with back in '88. Similarly buoyant, "Rumble" cavorts with a Latinized gait, revealing a harmonic sophistication reminiscent of its dedicatee, the great altoist Lee Konitz. Elsewhere, the group demonstrates its post-bop chops on brisk swingers like "Realm" and "Dyad Changes," though one would hardly deduce the latter was inspired by Anton Webern's erudite serialism.

The majority of the date comprises a tasteful selection of creative mainstream jazz, although there are a few raw, fusion-oriented scorchers interspersed throughout the set. Careening along in odd time signatures, "Seventh Jar," "Mustard" and "Bridge Scandal" amplify the proceedings with angular themes that culminate in rousing choruses, inspiring a series of blistering metallic runs from the leader.

In contrast, the pastoral ballad "To The Mountains" demonstrates McCann's affinity for folksy Americana with airy Frisellian overtones, while "Numinous" ventures into darker territory, gradually unfolding as an impressionistic rubato tone poem. The closing acoustic number, "Mine Is Yours," features a similarly pliant rhythmic foundation, its rhapsodic minor-key melody delivered with compelling urgency.