By Jack Bowers
September 9, 2015
Sign in to view read count 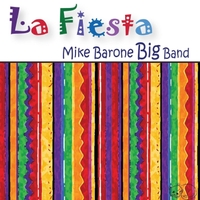 Mike Barone has been writing outstanding big-band arrangements for more than half a century. After listening to La Fiesta, Barone's ninth album as leader of the Los Angeles-based Mike Barone Big Band (counting Live at Donte's, recorded back in 1968), the logical question arises: does Barone ever run short of resourceful ideas? To which the obvious answer is, not yet. Where else, for example, but on a Barone album could sparkling new arrangements of such moss-covered Tin Pan Alley heirlooms as "The Sheik of Araby" and "Girl of My Dreams" peacefully coexist with Chick Corea's "La Fiesta," Dizzy Gillespie's "Groovin' High," Russian composer Aram Khachaturian's "Sabre Dance" and Bob Nolan's western classic, "Tumbling Tumbleweeds"? If you said "nowhere," that's an astute and accurate response.

"La Fiesta," taken at a reasonably brisk tempo but not one that is likely to harm anyone's chops, leads things off, dancing briskly around a muscular solo by tenor saxophonist Jon Armstrong. On "Groovin' High," Barone deftly splices Gillespie's well-known bop melody around the standard on which it is based, "Whispering," while listeners are treated to the first of three remarkable solos by Bob Summers, surely one of the most accomplished "unknown" trumpet soloists on the scene today. Summers' solos are models of insight and tastefulness, with every note so unerringly positioned that one might almost believe he had written them out in advance (which, of course, he hasn't). The hard-working rhythm section, anchored by drummer Adam Alesi, is also exemplary on "Groovin,'" as it is on every number.

Barone works his singular magic again on "Araby," which dates from 1921, and "Girl of My Dreams," written six years later by Sunny Clapp. Armstrong solos on the former, trumpeter Mark Lewis - Trumpet and soprano Tom Luer on the latter. Needless to say, in Barone's capable hands each one sounds as though it might have been written last week instead of nearly a century ago. "Port Townsend," the first of Barone's four original compositions, is next up, and it burns rubber behind a fiery tenor solo by Vince Trombetta. Antonio Carlos Jobim's lyrical "One Note Samba" (solos by Armstrong and pianist Sam Hirsh) precedes two more of Barone's charming compositions, "Cactus Sam" and "Gold 'n Juicy," each of which features the leader's signature "trombone chorale" and a splendid alto solo, on "Sam" by Luer, "Juicy" courtesy of Glen Garrett.

"Juicy" is followed by the album's lone "reclamation project," a superlative chart that Barone says "is one of the first" he ever wrote, namely the easy-moving "Tumbling Tumbleweeds," which made its recorded debut on Live at Donte's. Although Barone has gently tweaked the arrangement, the elements that made that earlier chart memorable remain essentially intact. "Tumbleweeds" embodies another impeccable solo by Summers, with Luer heard on alto. While the new arrangement is admirable, if pressed the nod still goes to Donte's. The classical "Sabre Dance," its frantic tempo slightly restrained, is a feature for pianist Hirsh, who solos again (with Summers) on Barone's upbeat blues, "The Phantom," which rings down the curtain on a consistently impressive session. The band is letter-perfect, Barone remains at the top of his game, and La Fiesta is a conclusive winner from any angle.