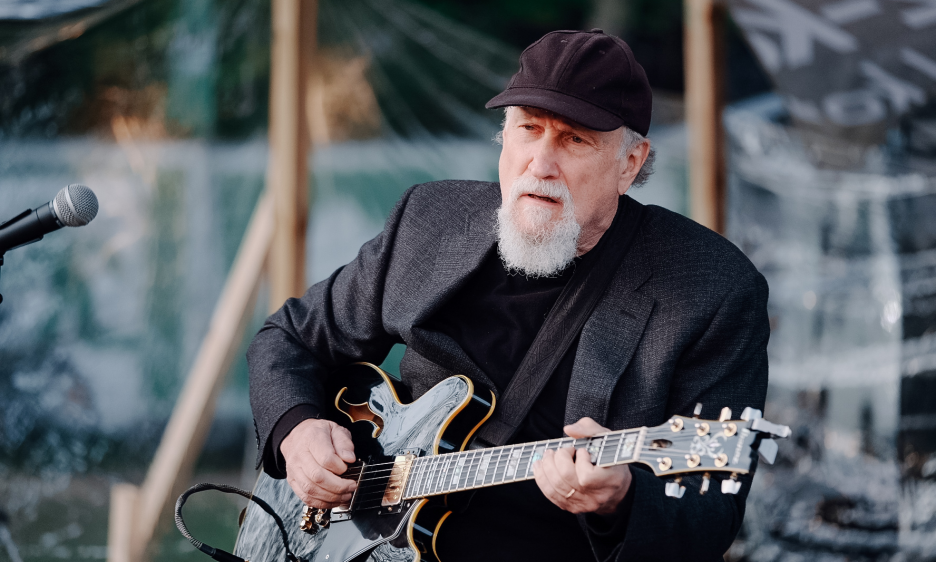 In a year that passed since the previous Moers Festival, the Covid 19 pandemic caused a lot of bad news regarding concert cancellations, closed venues, and further issues in the already challenging lives of professional musicians around the world. Thus, the success of this year's Moers event was a true cause of joy and a sigh of relief for performers, audiences, and the industry.

The four-day extravaganza was not the smoothest, most distinguished, or extraordinary program in the festival's history but the 50th Anniversary celebration held plenty of fine moments and some sets that could indeed be considered exceptional in any year. The Moers team deserves considerable credit for putting on a wide-ranging event that featured top jazz stars, eclectic talent from exotic locales and the usual mix of progressive experimentation.

A primary plus was another superb production job by the ARTE network that enhanced every show and provided first-rate streaming of the entire event, including interviews with performers and topical discussions that amounted to positive social action. A legislative decision was announced just before the weekend that allowed limited outdoor audiences, even though rain held attendance down. The on-site team that carried out over 1,400 mandatory Covid tests deserves huge accolades.

With the exception of a relatively gorgeous Sunday, overcast wet weather hampered much of the weekend. Still, there wasn't a single musician who looked or played like it bothered them a bit, probably through assurance of how the broadcast made everything look near flawless.

Opening highlights included a gathering of all fourteen previous "Improvisers in Residence" from a tradition established in 2008, and a beautiful solo set by pianist Brad Mehldau, who put a personal touch on familiar favorites ranging from John Coltrane to The Beatles to Radiohead. When The David Murray Trio (with bassist Bradley Jones and drummer Hamid Drake) equaled the magic of Mehldau's gig it exemplified both a Moers standard and the rare talent level of major US jazz players.

Drake also performed with another sax master, Joe McPhee, for a dynamic set in the UK trio Decoy with John Edwards on bass and Alexander Hawkins on keys, while McPhee was a major participant all weekend. He joined the jam-like "Moers Sessions 1" on Saturday and did a stint Monday with an impressive young ensemble who improvised on a piece by 18-year old competition winner Julius von Lorentz.

Percussion-based groups also made a strong impression, with Will Guthrie and Ensemble Nist-Nah perfectly suited for the 60's style vibe in the grassy outdoor stage area. Nihiloxica, a Ugandan / British band that mixes traditional Bugandan-based drumming with synthesized structures followed up on that rapid rhythmic equation. Later, inside ENNI Event hall, wonderfully upbeat Ethiopian band Fendika took everybody higher as the joyous ambassadors were joined by iconic Dutch drummer Han Bennink for a fantastic finale. The electrifying C'est le Temps-C'est le Tango from the Republic of the Congo rocked many online houses. While percussionist Huguette Tolinga walloped her unusual drumming assortment, guitarist Kojack Kossakamvwe and bassist Stephan Kitutu cranked up their axes like supercharged rhythm sticks in a fusion of traditional Congolese and electric US blues.

If there was only to be one day of sunshine it was good to have it Sunday, when audience favorite John Scofield performed a fine solo set. Considering it was just confirmed a few days before the show that audiences could attend and that only people proving a negative Covid test from within 48 hours would be allowed, the crowd of almost 400 ticket buyers (of a permitted 500 possible) was testimony to Scofield's popularity.

The 69-year old guitarist certainly lived up to his reputation, on what turned out to be a glorious afternoon as sheep grazed nearby in a thoroughly tranquil landscape. For part of Scofield's introduction, Moers Director Tim Isfort tapped out a rhythm that the audience picked up in accordance to the mini-Woodstock type rain chant scenario harkening back to Moers' original era.

Scofield sat down with his shiny black namesake Ibanez hollow-body, slipped off his shoes and set a comfortable tone for the crowd which was socially distanced but still in close enough proximity to allow for a relaxed, ongoing dialogue of old coffee house style interactions. The low key performance was like sitting around with a favorite friend or relative, who just happened to be one of the world's best guitarists.

He opened up loosely with The Beatles' "I Will" and his own "Twang," then tightened things up on an adapted "Resolution" by Coltrane. "Mrs. Scofield's Waltz" sounded appropriate for the many folks stretched out on blankets in front of the stage.

"I like to play old standards, right?" Scofield mused with a smile. "And you've got to remember that they were songs with words. Sometimes I like to tell you the lyrics while I'm making my loops, because I have the old kind of machine that I have to make them on right now. Don't clap until you hear it, I might fuck it up."

With that Scofield half sang, half murmured an engaging recitation of "There Will Never Be Another You," delivered like a spoken-word piece. The tonal touch was raw but effective. In fact, much of his performance was a bit rough, but in this situation that was a definite plus and made for highly personal, workshop type exchanges.

"I noticed that the looped chords sound really nice backwards," he continued. "I'm gonna play Blue in Green, but first I have to play the chords backwards. So bear with me, you'll see what I mean, I hope." As he reimagined the Miles Davis classic, just the concentration on Scofield's face as he seemed to mouth the notes was impressive enough. By the time Scofield closed his uncomplicated show (the real rarity at Moers this year) with a broad ranging down home medley, he had almost fully demonstrated why his appearance seemed by far the most popular of the weekend. When he told the crowd "I'll see you again," they were ready to line up for tickets.

As nice as Scofield's outdoor concert was, the indoor epic by Serbian groups Schime and Muzikon that directly proceeded it was even better due to mass, volume, and abstraction. Schime is a talented quartet (Luka Ignjatovic on sax, Sava Miletic on piano, Boris Sainovic on bass, Pedja Milutinovic on drums) from Belgrade who played Moers with an additional saxophonist in 2018. Today they appeared with Muzikon, a nineteen-member string ensemble well worth hearing more from on their own, and part of something exceptional during a collaboration on original compositions like "Dawn Tranquility" by Ignjatovic and "Doti Suite" by Miletic.

At first it sounded like Milutinovic's drums might overwhelm the other instruments but the overall soundscape actually benefited from bombast and was near perfect in general. Ignjatovic added a light touch of conducting then added his sax for strong, swirling accents and the rest of the quartet got a few moments to show their skills as a foundtional unit. It was cool to watch the orchestra observe the group. Passionate change-ups in sweeping crescendos conjured vistas from open sky to urban congestion.

It took more than just the music to complete an absurdly magnificent artistic alchemy, as giant rat-like figures moved slowly around the stage area amidst bright green, full body suited "moerphs" and multi-colored flower-power designs that were displayed everywhere. The setting was sort of ridiculous, but it typified the Moers aesthetic and for a while it was a wild, wacky dream come true. In 2019 the Metropole Orchestra and Donny McCaslin created something similar for a couple shows in the Netherlands, also with splendid results, but that project possessed none of Moers' theatrics. As Sunday's set progressed, unsung heroes in the bulky rat costumes got pretty good at pantomiming the groove.

Blasting into the finale, Milutinovic took an appropriately thunderous solo before everyone broke into hard bop-like finishing fragments. With or without allusions toward jarring contemporary statements about pandemic recovery or the scattered symbolism of character poses and settings, as the strings soared and the band rammed everything home the set became performance art of the highest order, a small scale spectacle that likely stands as an apex in Moers' recent history.

Even with glowing superlatives or HD video, unless someone was actually one of the forty or so fortunate people inside the performance hall there's no way to fully express the zany brilliance that flashed when all related elements converged for an amazing, unlikely result. We'll call it lightning in a bottle and leave it at that.

There were more than a few groups that employed unusual vocal techniques. Perhaps the best of these featured bassist Joëlle Léandre, pianist Myra Melford, and soundstress Lauren Newton, who voiced a stream of syllables that often resembled real words for intriguing effects. Sometimes the trio's intensity reached a point of being stressful, but they soon transitioned into something gently reflective and unlike many similar formats there were definite distinctions between songs. Leandre's solo introduction preceding a duet with Newton was a sonic delight.

By Monday, a steady rain had unfortunately returned and there was almost no audience present for the solid Laura Schuler Quartet with Tony Malaby on sax, keyboardist Hanspeter Pfammatter, and drummer Lionel Friedli. Too bad, since Schuler's violin and vocal tones floated like a dream above the empty green field. Kudos to those few hearty souls on the wet grass who gave the band at least some of the applause they deserved.

Rain continued throughout most of the day and the field stayed pretty much empty until the closing concerts, which was probably OK for a season of endurance and rebirth. Closing duties were left to a trio of guitarists deemed Back to Basics, made up of early Moers stalwart Fred Frith with Ava Mendoza (who each previously appeared in other formations) alongside Oren Ambarchi, who added multi-electronic distortions. Their space-warped set was a solid wrap to one of Moers' most unusual editions. Resounding reverb provided quite the fitting adieu.

The theme for this year's festival was "fighting for the future," toward goals that were larger than just music alone. It seemed most people at Moers were happy with the many small victories to be had these days, though disappointments and challenges remain in both social and pandemic arenas.

There was a lot of construction going on in the nearby surrounding park area so some things might look quite different by next year's gathering. The Covid 19 situation remains uncertain but that didn't stop people from smiling in positive greetings as they moved between venues. One of the Moers Festival symbols is a pure, glowing moon and the actual, cosmic embodiment of that hopeful sight was often fully visible overhead.