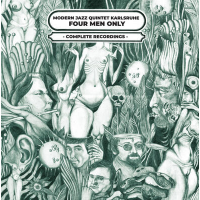 It's not often that something comes along which upends accepted wisdom, but that's what the Lithuanian NoBusiness imprint has accomplished with the reissue of four albums in a three-CD box set by the now unremembered Modern Jazz Quintet Karlsruhe (MJQK) and its successor FourMenOnly (FMO).

The group, comprised of Herbert Joos, reedman Wilfried Eichorn, bassist Klaus Bühler, pianist Helmuth Zimmer and drummer Rudi Theilmann, barely merits a footnote in the current accounts of European free jazz. But this collection demonstrates its forward looking credentials and unprecedented flowering of talent in Germany between 1968 and 1973, sufficient to rate alongside that of now esteemed names such as Gunter Hampel, Manfred Schoof, Alexander von Schlippenbach and Peter Brötzmann.

MJQK's first album, Trees (1968), presents an outfit in transition from the diet of American standards and hard bop which had been the group's mainstay after its formation in 1965. By this time, they already concentrated on originals, largely composed by Joos, but workshopped and arranged through rehearsals into a true ensemble music in which jazzy episodes butt up against New Music, prog rock and non-idiomatic influences.

Furthermore, Zimmer's "Lonely Time" surely references Ornette Coleman's classic "Lonely Woman," not only in its title but also in the aching horn line pitched against a fragmented bass strum and faster cymbal pulse. Although series of solos tends to follow the heads, the settings lean to the unexpected, evidenced by the textural accompaniment for Bühler's bowed then picked bass on "The Devil Is Green, Blue, Yellow." The juxtaposition of convulsive polyphony and contemplative solos on the closing "Change Of Beauty" most signals departures from established norms.

By the time of Position 2000 (1970), MJQK already sounds more removed from jazz, with more contemporary classical echoes. But in another development, everyone now doubles on percussion too, giving the date a distinctive character in which Theilmann's kit largely relinquishes any time keeping function, while Bühler's bass takes on a more pronounced role, playing lead with bow in hand alongside the horns. Though Eichorn increasingly invokes free jazz tropes, Joos' flugelhorn still resides in a lyrical, jazz-inflected ballpark. The duet between them constitutes a high point of "The Sun Is Coming Over," an extended extravaganza which also invokes psychedelia and world musics during its broad narrative arc.

Spread across the first two CDs, the package includes two bonus live tracks from the 1971 Hannover Jazztage, recorded three weeks before bassist Bühler abruptly left the MJQK. His bass features prominently in "Unreleased 1," before what sounds like passages of directed ensemble interplay. On "Unreleased 2" , an initial blast contrasts with a stately theme, making space for unaccompanied forays from bass clarinet and flugelhorn, both punctuated by shrill flutes. The pieces are episodic, measured and largely restrained, not typical festival fare, but still containing enough unanticipated elements to grab attention and fire the imagination.

Operating under the title FourMenOnly, on Volume 1 (1972) the group's evolution has continued apace and makes light work of Bühler's absence. Unconventional structures are commonplace and the solos are less indebted to jazz, sometimes reserved and abstract, at others wildly exciting. Now the sole author, Joos' writing deploys the resources at his disposal, ever more imaginatively, supplemented by judicious multitracking, notably on the purposefully braided "Ich Und Meine Brüder" which multiplies the trumpeter four times.

The emphasis on small percussion instruments endures, allowing the music more space to breathe. While Zimmer's piano is relatively sparsely heard, he nonetheless serves up one of the highlights in a wonderful solo towards the finale of "Count Down/Excess," which rampages through the territory of a Cecil Taylor or Schlippenbach thanks to its percussive energy, while remaining in control throughout. This album represents the group's pinnacle, by itself it worthy of five stars.

Eight Science Fiction Stories (1973) represents the final entry in the discography of the band, now called FourMenOnly + 1, thanks to the addition to the ranks of trombonist Wolfgang Czelusta. Even so the overdubbing continues, permitting big band-like interjections to become part of the language, occasionally recalling contemporaneous outfits like Brotherhood of Breath and Keith Tippett's Centipede. With less stress on percussion, more free jazz traits reappear in the unfettered dialogue between Joos' flugelhorn and Theilmann's drums, the conversational horn interchange, freeform piano and the overdubbed riffs.

In a further change, individual compositions run together in two sidelong suites. Sometimes the links are seamless, as on the first when Zimmer exits another thrilling outburst with the repeated rhythmic figure which forms the core of the subsequent piece, then elsewhere with only the briefest of pauses separating numbers. An adventurous and innovative sequence for Eichorn's overdubbed bass clarinet and other reeds, starts out subdued but ends with an exchange of fractious squeals and crusty blurts, which presages the more extreme moments of groups like the World Saxophone Quartet. It's hard to discern any precedents for this music.

With Joos' departure in 1974, the unit's heyday was over. He was the only member to have any sort of wider profile following the group's disbandment, achieving the wider palette he craved as a stalwart of the acclaimed Vienna Art Orchestra. But that's not to downplay the important contributions of the other members. What they produced was a true ensemble music, which anticipated many gambits which later became more widespread in the avant-garde jazz milieu.

Although forgotten now, the group did enjoy a certain amount of profile in its day, as indicated by the numerous festival appearances both within and outside their homeland mentioned in the informative liner booklet. Enormous credit is due to Nobusiness Records, in cooperation with German writer Ernst Nebhuth, for lovingly repackaging this momentous reissue, which should introduce the MJQK's music to a whole new generation and perhaps gain them their rightful place in the history of European jazz.