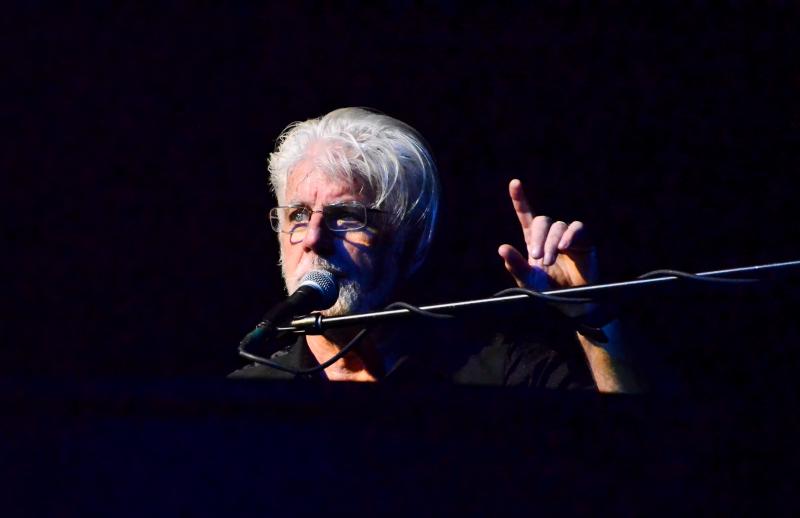 Michael McDonald has had a long and storied career. In the early days he was a member of Steely Dan's touring group. Over time he became one of the many adjunct members of the band, working on 1975's Katy Lied (ABC Records), The Royal Scam (ABC Records, 1976) and Aja (ABC Records, 1977). In 1976, he joined the The Doobie Brothers, first appearing on Takin' It To The Streets (Warner Brothers), providing the band with a touch of R&B-influenced pop and soul. By the early 1980s, the Doobie Brothers were no longer a rocking guitar-based outfit but a more soulful keyboard-driven group. His last release with the group was the live collection Farewell Tour which was released by Warner Brothers in 1983. In 1982, Warner Brothers released McDonald's first solo album, If That's What It Takes. Since that time he has released an additional seven solo albums as well as a collection of Christmas tunes. During his forty-plus year career, McDonald has collaborated with (among others) Kenny Loggins, David Cassidy, Van Halen, Patti Labelle, the Winans, Aretha Franklin, Toto, and Donald Fagen. McDonald has won five Grammy Awards. Boz Scaggs has also been producing his own brand of R&B flavored rock 'n' roll for almost fifty years. Though he recorded an album in 1965 called Boz (Polydor Records), his career didn't take off until he became a member of the original bluesier version of the Steve Miller Band. He exited the Steve Miller Band after recording two albums and in 1969 released an eponymously titled album on Atlantic Records. For almost fifty years he has recorded and toured as a solo artist and as a member of the New York Rock And Soul Review (with Fagen, Phoebe Snow, McDonald and others). He has also toured with Fagen and McDonald as The Dukes of September. Now in 2017, the 1977 Grammy-winner (for best R&B song—"Lowdown"), is again touring with McDonald.

On a pleasant July 5th evening, with many audience members still enjoying an elongated Independence Day holiday, the McDonald and Scaggs tour made its way to Huntington, NY's Paramount. The venue was packed to the gills with an audience comprised of fifty-somethings, many of whom brought the family. Some even brought the extended family including the grandkids.

Scaggs was up first. His performance touched on all aspects of his legendary career. He opened with "Its Over" from what is perhaps his most revered album, Silk Degrees (Columbia Records, 1976) and "JoJo," from Middle Man (Columbia Records, 1980). The set was highlighted by "Some Change" from the 1994 Virgin Records album of the same name, "Georgia," (on which he reminisced about a lost love) and by what could arguably be called the mega-hit section of the show during which the floors shook and the audience swayed to "Look What You've Done To Me" (from the movie Urban Cowboy), and sing-a-long versions of "Lowdown" and "Lido Shuffle."

Throughout the evening Scaggs was in excellent voice and did not disappoint. His vocals were both soulful and bluesy. His fretwork was spot-on and his band functioned as a well-oiled machine delivering each song with powerful precision.

After a short break, McDonald took the stage. The energy level was high—both among the band members and the mostly middle-aged crowd. McDonald's voice remains top-notch and, of course, a very distinctive instrument. Even now, so many years down the road, it has not lost its edge. The dozen song set was well-balanced featuring Doobie Brothers' hits and McDonald's best loved solo tunes. McDonald's tickled the keys with aplomb and his cool and soulful vocals were crystal- clear. His band was tight and the sound in the intimate venue was stellar.

Opening with the Grammy-winning classic "Yah Mo Be There" (which is technically a James Ingram song as it was originally released as a duet on Ingram's 1983 Quest/Warner Brothers album It's Your Night), McDonald, the song's co-writer, succeeded in making it his own. The audience members sang along and most had no idea of the song's true origin.

The set list included the solo hits "I Keep Forgettin' (Every Time You're Near)," and "Sweet Freedom." A Michael McDonald show would not be complete without a smattering of timeless Doobie Brothers songs. This show was no different as McDonald delivered superb versions of the 1979 Grammy-winner "What A Fool Believes" and "Minute By Minute," from the Minute By Minute album (Warner Brothers, 1978) and the show's finale, an amazing version of "Takin' It To The Streets."

Judging by the number of audience members sporting grey hair many had most-likely seen both of these artists "back-in-the-day." A few were heard boasting about "seeing Scaggs in Central Park" and "I saw him with the Doobies back in the early '80s." Regardless of whether it was an audience member's third, fifth or first time seeing these two musicians, the performance was rousing and exciting.