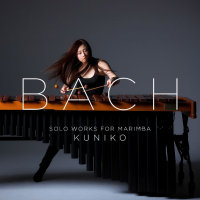 Johann Sebastian Bach. His music is a cornerstone of Western Civilization. On reason Bach's music has had staying power in our quickly evolving culture is its durability. Bach's music has been effectively framed by vastly different instrumental approaches. These include Vittorio Ghielmi's near-the-intent viol consort approach to The Art of Fugue (Winter & Winter, 2009), through Uri Caine's reconstructed Goldberg Variations (Winter & Winter, 2000), all the way to Bill Cunliffe's BACHanalia (Metro, 2017). That is an impressive breadth of interpretation and Bach's music holds up to all of it.

Enter now, percussionist Kuniko (Kato) with her marimba treatments of selected Bach preludes and suites, Bach: Solo Works for Marimba and this tent of interpretation grows ever larger. Hot on the heels of accordionist Mie Miki's bold and far-reaching Das Wohltemperierte Akkordeon (BIS, 2017), Kuniko's perfomances can be heard as an important addition to the long tradition of alternative Bach performance. While the marimba might seem an unlikely instrument for Bach, it is no less likely that Miki's accordion, or Glenn Gould's piano performances of the Goldberg Variations. It is a fairly clean evolution over percussive "keyboard" instruments.

Taking a Baroque step backwards, Kuniko addresses some well-known music of Bach with the same crystalline precision she has demonstrated on her earlier recordings. The pieces the percussionist chooses are tried and true: The opening prelude of The Well-Tempered Clavier, The Cello Suites Nos. 1, 3, and 5, and the first three Violin Sonatas. These will be readily recognizable to many listeners. Hearing these pieces, these notes played is succession on the marimba produces the two-fold effect of softening Bach's sharp edges and redefining the marimba as a viable classical music instrument. The sound of the marimba is organic, wooden, something like a vibraphone played and heard under water. It is a pleasant and soothing sound, one well attuned to Bach's music. That said, the dynamic of the marimba are necessarily narrower than the original instruments for which the pieces were composed. This is a plus in the respect that these marimba pieces really display the bones of Bach's working, showing just how integral this music is and what a fixed part of our collective cultural unconscious. Kuniko's performances are a mathematical and physical wonders, revealing Bach as never before in all his fecund possibility. Critic's Note: Anno Domini 2017, marks both the 100th Anniversary of recorded jazz, deftly noted by the release of the Original Dixieland Jazz Band's shellac "Dixieland Jass Band One-Step (A)/Livery Stable Blues (B)," Victor 18255, recorded February 26, 1917 and released March 7, 1917. At that time, my father was 18 months old and my mother was yet to be born for two years. It is also the twentieth anniversary of me writing for All About Jazz. The first recording I reviewed for the magazine was Art Pepper's San Francisco Samba (Contemporary, 1997), published December 1, 1997. I am using this present review as part of a series noting my twentieth anniversary with the magazine and paying special tribute to my fellow writers at All About Jazz and Publisher Michael Ricci.