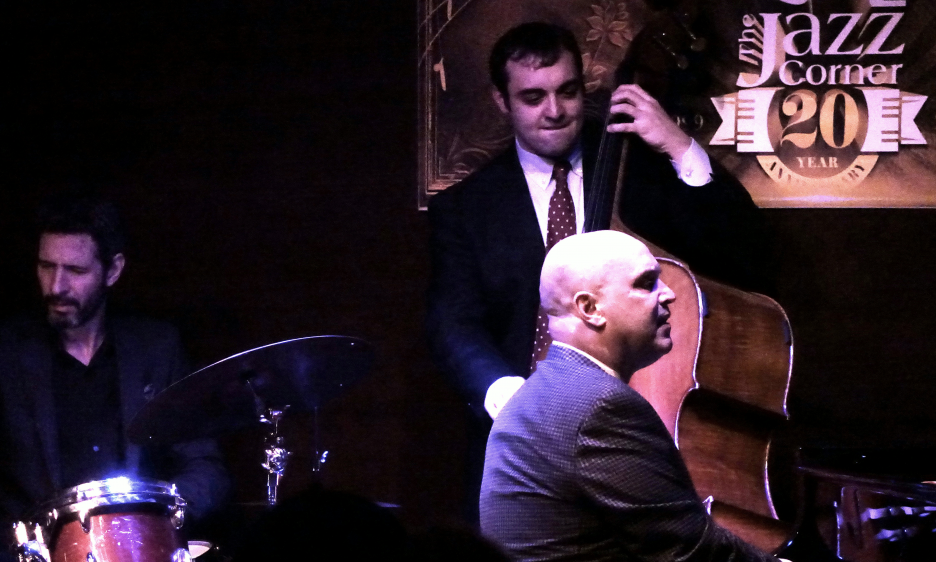 On a Saturday afternoon between performances, Larry Fuller took a moment to talk about his music while enjoying a coffee break at the Sonesta Oceanfront hotel, on Hilton Head Island. In the morning, he had walked the beach with his wife Jane, and enjoyed the bright sunlight and fresh autumn breezes, which blew away any lingering city cobwebs. They were both excited and amused to see alligators in a lagoon near the hotel. A quietly-spoken Midwesterner from Toledo, Ohio, and now New York City, Larry Fuller is an unpretentious pianist who delivers excellent musical quality. When playing, he avoids systems and electronics and listens instead to the instrument, concentrating on the acoustic sound. He declared his intention, "I want to play music of high-quality, which remains accessible, following the tradition which was instilled when I played with Ray Brown, to add joy to music and make it swing. Oscar Peterson had that same joyous, swinging sound."

Fuller declared an aversion to music that is too complicated and academic for anybody other than musicians to enjoy. "There are so many excellent young musicians coming out of music schools in New York City now," said Fuller, "but much of their music has an academic, cerebral feel to it, schools forgot to bring the street-level joy and spirit." Joy means complete emotional immersion sharing access that opens out into his music.

Like many musicians, Fuller is concerned but fatalistic about the change from CD sales to streaming services, which may eventually take musician choices away from the listener and give them to an algorithm. "It's endemic," said Fuller "automobiles now come fitted with streaming systems as standard. When people buy a copy of Overjoyed from me at a gig, I take it as a compliment to the music, an expression of their thanks, which I sincerely appreciate."

We spoke for a while about how the energy in the room can positively affect performances. "A good, responsive audience can uplift the musicians," said Fuller. "My central aim is that the audience should sense a connection and feel better when they leave than when they arrive. In small venues, when people come over to say good night, their enjoyment is visible." We spoke too about the difficulty of interviews being the same as the challenge faced by two people speaking different languages. Fuller firmly believes in music as a language, when he wants to explain something musical, he goes to a keyboard, but he did agree that words can form a bridge to music either as written word or as lyrics.

In the evening, Fuller was joined by Jason Tiemann on the drums and George DeLancey on acoustic bass while his wife Jane joined the audience with friends for the performance at The Jazz Corner.

They started the set with guitarist Wes Montgomery's "Fried Pies" and moved into "Jane's theme," (listen) which Fuller charmingly wrote for his wife. Next came the title track of his CD Overjoyed (Capri, 2019), a 1980s Stevie Wonder R&B love song reworked into the jazz idiom.

Fuller brought together two pieces from the Duke Ellington Suites, the first sacred music "Reflections in D" and the second from the Queen's Suite "Sunset and the Mockingbird," which Ellington wrote together with Billy Strayhorn for H.M. Queen Elizabeth II, presenting her with the first pressing. Dizzy Gillespie's "Tin Tin Deo" came next, the insistent melody taken upbeat by a heavy roll on the floor tom finished with a cracking rim shot. They slackened the pace, and the bass softly took them out, repeating the melody line to a fade. The trio ended the first set with a rousing rendition of Muddy Waters "Got my Mojo Workin'" (see video below).

They took a break, and the second set started with that "Old Devil Moon" a favorite Frank Sinatra standard. On to South America for a smooth swinging, "Bossa Nova do Marilla" then into the rapid-fire Bud Powell tune "Celia" (which he recorded in 1949 on a single day-release from a spell in State hospital). After that frenetic effort, they went soft and easy into Joni Mitchell's "Both Sides Now" ("It's loves' Illusions I recall / I really don't know love at all").

Larry Fuller led his trio on to achieve a solid audience connection through his wide-ranging setlist and boisterous, authentic style. The keyword for his performance was joyous, which was palpable throughout the entire evening.