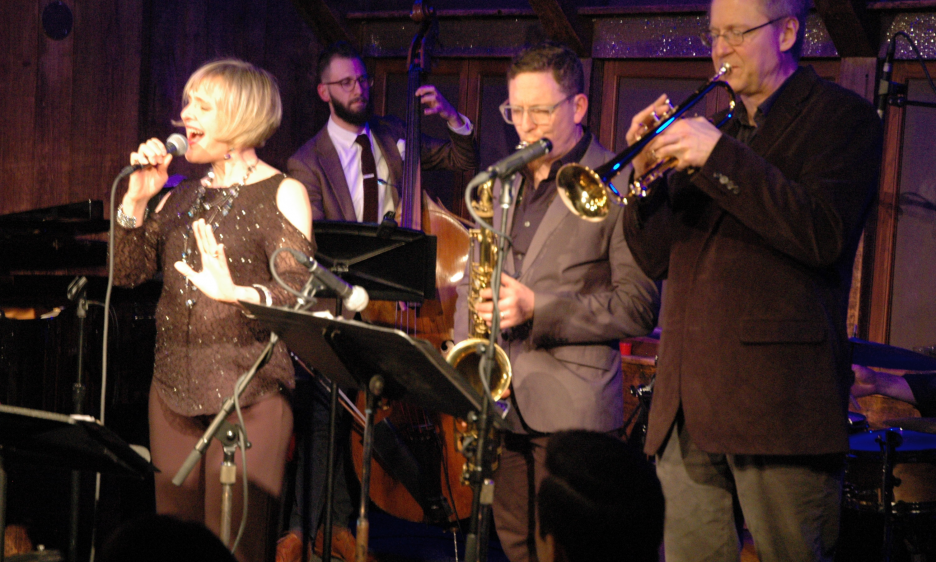 It was the Saturday night before the Superbowl kickoff, and the crowds were out and about in Philadelphia with a "Go Eagles" attitude. A full house crowded into Chris' Jazz Café to hear their vocalist pride, Mary Ellen Desmond with the solid backing of tenor saxophonist Victor North's Quintet including the venerable John Swana on trumpet and valve trombone, ubiquitous pianist Tim Brey, smart-as-a-tack bassist Justin Sekelewski and swinging drummer Dan Monaghan. Nick Foles would have done a great job of quarterbacking this crew of seasoned jazz artisans, but Desmond called all the right signals herself.

The set began with two hard bop instrumentals: Cedar Walton's "Hindsight" and Dexter Gordon's "Society Red." North and Swana proved an excellent match with their strong sonorities and careful articulation of phrases, with North sticking to the tradition and Swana adding his sophisticated chord changes and passing notes that make him one of the most highly respected instrumentalists in the business. Then Desmond came on accompanied by the rhythm section with Bob Dorough's warm and intimate "A Small Day Tomorrow." This reviewer's favorite version of that song is Irene Kral's at Half Moon Bay (Irene Kral Live, Just Jazz, 2000, recorded 1977). Kral emphasized the seductive message, while Desmond's version seemed more chatty, taken at a somewhat faster tempo (I'm tempted to say that Irene took it at a Kral, pun intended.) It was followed by Rogers and Hammerstein's "Surrey with the Fringe on Top," hard to think of as a jazz tune, except that Desmond made it work with a vamp rhythm similar to the way that Miles Davis did with his quintet. The standard, "No Moon at All" is a perfect vehicle for Desmond, who crooned it with a seductive lilt.

Desmond included some o lyrics for "Better than Anything," with being in love being better than Basie and Ella, much less snowflakes and sleigh rides. "Old Devil Moon" gave the instrumentalists full opportunities to improvise in a swinging Frank Sinatra-like version livened up by the rhythm section and Swana's (surprisingly) steamy trumpet. The set concluded with a tribute to Thelonious Monk. The haunting ballad, "Ruby My Dear" featured a stunning piano solo by Brey. And for a truly grand finale, Desmond and the group wailed on the Irving Berlin show tune, "Blue Skies," segueing into Monk's "In Walked Bud," composed to the same chords as "Blue Skies," what the beboppers called a "contrafact." In addition, Desmond inserted Jon Hendricks' vocalese version that he performed at least once with Monk himself.