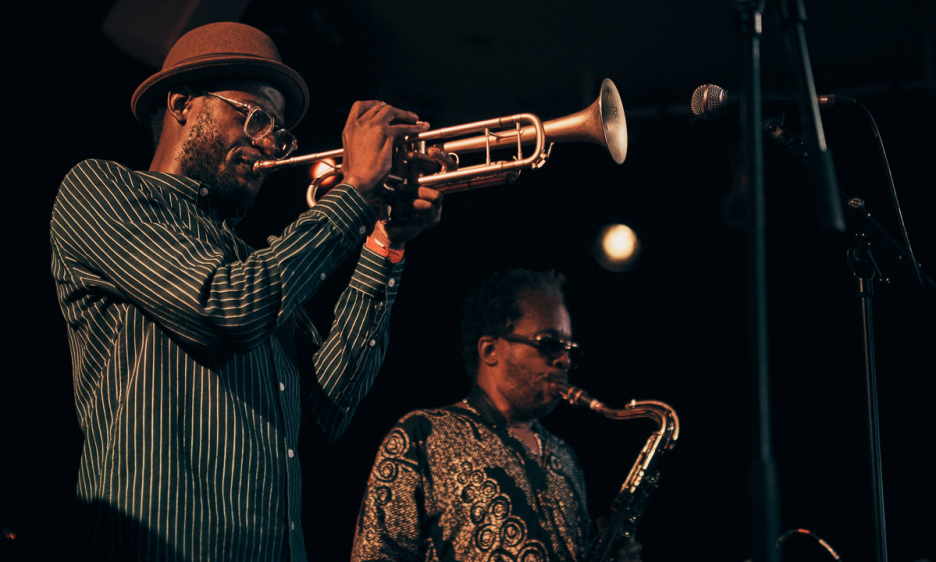 Tonight's event at the Barbican Art Gallery was a vivid audio-visual timewarp which transported the audience back to bohemian New York during the 1950s. The vehicles were Abstract Expressionist art and hard bop. The performance was part of the Barbican's Lee Krasner: Living Colour exhibition, which runs until September 1, 2019.

All AAJers know Thelonious Monk. Fewer, perhaps, will know of Krasner (1908—1984). The wife of Jackson Pollock, Krasner was a painter of great talent. But because she was a woman in the male-dominated art world, she received only a tiny fraction of the recognition accorded to her husband. The Barbican exhibition, which displays some of Krasner's most gigantic (and smallest) paintings, is an attempt to put that right.

Krasner was a habitué of New York jazz clubs and a life-long fan of the music, and one of her favourite albums was Monk's masterpiece Brilliant Corners (Riverside, 1956). So someone at the Barbican had the bright idea of asking trumpeter Mark Kavuma to put together a quintet to play the music of the album, in the main gallery in the center of the exhibition. Given the art on the walls and the music coming from the band, the capacity audience could have been at New York's Museum of Modern Art back in the day. (Monk almost certainly visited MoMA; there are photographs of John Coltrane doing so).

Kavuma has a gift for assembling empathetic lineups from outwith the pool of usual suspects. His The Banger Factory octet is a great example, bringing together relatively unknown and familiar names. Tonight's quintet was another. The Banger Factory's tenor saxophonist Mussinghi Brian Edwards and double bassist Michael Shrimpling were joined by drummer Luca Caruso and vibraphonist Anthony Kerr, whose instrument kind-of took the place of Monk's piano (and celeste on Brilliant Corners' "Pannonica").

Kerr was the only band member referring to sheet music and so looked like he might have been a last-minute dep for The Banger Factory's David Mrakpor. But he did not sound like a dep and tore off some viscerally exciting solos. So, too, did Caruso. After his outstanding solo on "Ba-Lue Bolivar Ba-Lues-Are," with its masterly and Monk-like use of rhythmic displacement, the phrase The Great Caruso inevitably came to mind. Kavuma and Edwards, as we have come to expect, were on fire throughout.

The quintet played for just over an hour and a half, including a fifteen-minute interval. The eight-tune programme included all five Brilliant Corners tracks—"Brilliant Corners," "Ba-Lue Bolivar Ba-Lues-Are," "Pannonica," "I Surrender Dear" and "Bemsha Swing." Familiar fare, surely, but genius material like this is not diminished by the passage of time, and nor does it need to be "reimagined" or "recalibrated." Just play it. And that is what Kavuma and the band did tonight. The only tune that was recast was "I Surrender Dear," which Monk played solo on the album. Tonight, Kavuma and Edwards sat out and it was arranged for vibraphone, bass and drums, showcasing Shrimpling. We have probably all endured tedious bass solos in our time, but this one was a mellifluous joy. The audience was rapt. You could have heard a metaphorical reefer drop.

The band also played a fast and ferocious "Hackensack," on which Kavuma's pyrotechnics evoked Dizzy Gillespie at his boppest, and a melismatic "Round Midnight," full of gorgeous trumpet smears. (Kavuma has prodigious technique, which he wears lightly; it is only during moments such as these that the listener is reminded of it). The evening closed with a rousing version of "Straight No Chaser."

Mark Kavuma's present-tense album The Banger Factory is out on Ubuntu Music.